I’ve decided while I can’t write about everything, there are some bits
of my Mystery Project that I can discuss. Especially in the early
stages. I’ve already said that it’s a commission for Classic Elite, and
that it’s going to be fulled.

Here is my first set of swatches: 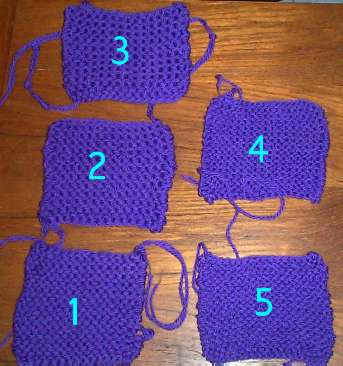 That’s a lot of swatches!

I’m using CE Renaissance.
It’s a 100% wool worsted weight yarn. It’s got quite a bit of loft due
to it’s three-ply construction, and the maker’s gauge is expressed in a
range – from 5spi on US#7 (4.5mm) to 4.5spi on US #8 (5mm). My
direction is to make a very firm fulled fabric, so I’ve made three
garter stitch swatches from double strand and two garter stitch
swatches from single strand. Here are the pre-wash specs:

Although
I used up a whole skein plus part of another in swatching, it’s worth
it. Note that I’ve got not quite a straight progression, but enough of
a gauge and texture difference to make the experiment worthwhile. The
plan is now to full these as much as possible, then compare the final
dimension with the pre-wash measurements. That will allow me to figure
out what my knitted dimensions need to be to achieve a post-full target
measurement. I’ll also get to see how both row and stitch measurements
change (important as knitting does not shrink uniformly in both
dimensions. I’ll also find out which of my gauges produces the best
fulled fabric for my purpose. Washing will happen later this week. Stay
tuned!

How do I know which swatch is which? See those knots in
the cast-on tails? That’s how they’re numbered. With luck those knots
will still be discernible after fulling.