On the baby blanket, I decided to rip back the entire edging (about half-finished at the point of decision). I decided I wanted to re-do corner #1, plus I didn’t like the way that the joins along the first edge looked. I’d been reducing along the body, working roughly every six rows of edging onto four live body stitches. While the points were lying flat, the yarn I’m using is heavy enough to make the necessary decreases along the body look clunky. (You can get away with this in a fine lace, but not in the almost DK weight I’m using). Instead I’ve opted for a bit fuller edge with (perhaps) a bit of ruffle. I’d post pix, but they pretty much show the same blanket body as the last post, but with an arrow that says “edging used to be here.” More on this later this week.

In other news, I finally got to the post office to pick up the mail I had on hold over vacation week. There, perched on top of the pile was my July No Sheep secret pal package. The formerly mysterious (but now known) Melanie was kind enough to send this: 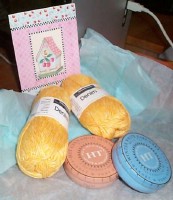 That’s two skeins of Schachenmayr Denim in a sunshiny yellow/orange, plus two tins of killer tea. I dance a dance of thanks! I’m looking forward to trying it all. On the downstream end, I finally made contact with my secret pal recipient, and am busy picking out the goodies for her.

And finally – progress on the bathroom front. Which is a good thing because washing one’s hair in the sink can get old after five weeks. The tile is now (mostly) up and grouted. Vanity, storage cabinet, fixtures and finish work are left: 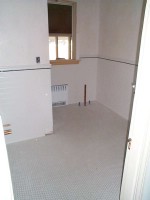 From the top – the view from the hall door. You can see the cleaned, repaired and repainted radiator, the pipes for the bathtub, and the new window frame into which the original stained glass will be fitted. Next is the shower, followed by the view from the window. No I didn’t crawl out on the roof to take this – there’s a sleeping porch on the other side of the window. And finally, a close-up of the tilework’s green pencil line and chair rail – just for Kathryn, who has confessed to extreme bath envy.

If you’ve written to me in the past two weeks and haven’t had a response – apologies. I’m still munching my way through my inbox.