Suzie asks to see the back of my Clarke’s Law sampler. Here it is in the dawn light:

I’ve not been very assiduous about making it 100% two sided, but double running stitch does lend itself to highest efficiency if one follows that logic. I’m also using knots, for which I am wildly unapologetic. Also, I’m not one of the back-is-perfection nazis. Neat, yes. Long jumps and stringy bits can be shadow-visible from the front of the work. Plus work should have a logical progression that uses thread efficiently. Rabid about it though – no. Historical works weren’t perfect.

If you notice, both the plume and hops flower patterns contain elements that cannot be worked 100% double sided – isolated lines or units not attached to the main work area. For example, in the hops flowers those are the little detached diamonds that inhabit the central motif. If I were to work this pattern double sided I’d modify it slightly, adding a vertical connecting each of those diamonds to the lozenge that surrounds it. That way front and back could be completely alike. But since the back on this won’t be visible once it’s mounted, I’m not making an extreme effort. Still, you can see that with the exception of the voided backgrounds, I’m pretty close: 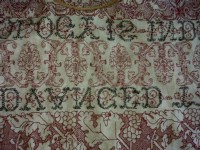 Plus as you can see from the back of the piece at the top, I’m on the letters that follow the hops band. What to do next? I haven’t decided yet.