Things here at String Central are about to be totally up-ended.  We’ve now lived in the New House for about 10 years, which makes it not so new any more.  In truth it hasn’t been new for quite a while, having been built in 1911 or so.

When we bought it we looked around and fell in love with the place. Some parts more than others:  the large, open layout, the abundance of surviving original woodwork and detail, the high coffered ceilings in the living and dining rooms, having a tiny library(!) plus sufficient space for all of the bedrooms, office areas, and workrooms a family with a wide variety of solitary pursuit interests needs.

On the problem areas, we’ve gone through a long list of improvements over the years, most having to do with systems: heat, insulation, wiring; or structure. New plumbing, a full-house rewire to get rid of (barely) functioning knob-and-tube, secure/weather-tight basement windows, a new heating system with a separate upstairs heat zone, insulation, a new roof, and a new driveway are just a few.  Other than rehabbing the poorly functional upstairs bath, we haven’t done much in the way of aesthetics or livability, beyond addressing basic needs.

After 10 years we are about to begin a major kitchen rehab, and FINALLY be rid of the sagging mint Formica countertops, the droopy cabinets, the dismally scratched (and hideously pink) floor tile, plastic sheet backsplashes; and the outdated, poor functionality of our layout.  I can hardly wait!

Here’s the official set of Before Pictures: 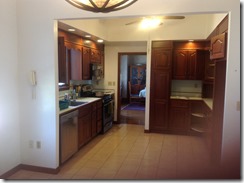 In the shots above you can see the partial wall between the prep and dinette areas, that breaks up the space without adding value. They are remnants of what had originally been a full wall, separating a back day-room for maid’s work from the kitchen proper.  This is now our eat-in area and will remain so, but the partial wall is going.

And here are the mint green counters and plastic backsplash of the inconveniently far from everything Other Counter.  It’s the clutter-magnet area where we stash recycling, and although absent in this shot, where pantry overflow usually sits.  This space will also no longer sit idle. 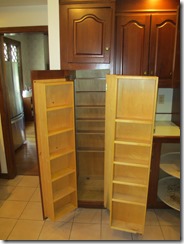 Although we do have an pantry, it is of very little use, with narrow shelves too shallow to accommodate most cans, boxes, or jars.  The front part is a hinged armature that is very difficult to move if you want to access similarly shallow dead shelf space behind. We are in sore need of effective pantry space.  The new design will address this, too.

The rusted, creaky round-abouts (lazy susans) are an invitation for stuff to fall behind and jam the mechanism, with center poles that preclude larger items.  The gadget garage isn’t bad, but tends to be another clutter-magnet area, and uses up more useful space than it provides in return.  Technology for corner cabinetry has vastly improved since the ‘80s.  I’m looking forward to the new solution.

On overall design, the current kitchen/dinette area, although it looks large, is not wide enough to add an island or peninsula without serious bottleneck or access issues, so we are not going to radically change the footprint.  However, the current arrangement of appliances and countertops isn’t very efficient.  We end up doing 90% of our prep work in the two foot space between the sink and the stove.  The stove itself  does not have a vent to the outside, which doesn’t add to ease of keeping the room clean. And the kitchen is dark, with too many lights that don’t manage to provide illumination of the actual work areas.

In the mean time, we’ve moved out of the kitchen, so the crew can come in tomorrow to start demolition.  We’ve crammed everything into the living and dining rooms, and will live without stove, oven or microwave, dishwasher or useful kitchen sink for the time being: 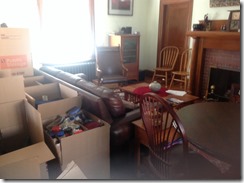 We plan to address all of these issues.  Stay tuned to see how!

For my knitting and stitching pals – don’t worry.  This isn’t going to turn into a home-improvement blog.  I continue to plug away on the wavy infinity scarf/cowl, plus progress on a pair of socks.  I always have a pair going, as “briefcase knitting” to do while waiting for appointments, on line, or in other away-from-home-base moments of idleness.

It’s slow going.  As I’ve said before, I spend as much time untangling as I do knitting.  And I still need to pay attention to the pattern.  I haven’t memorized the thing yet.  So it’s difficult to do when I’m watching TV in the evenings – my favorite time to do handwork.  Especially so because we’re re-watching our set of Lone Wolf and Cub TV series DVDs, which are in Japanese with subtitles, and on Netflix, the Norwegian series, Occupied, similarly subtitled from Norwegian.

So there you have it.  Chaos is about to descend.  But at least I can knit my way through it, while nibbling sandwiches in the dining room.