NOT SO OOP BOOK REVIEW – FOR THE LOVE OF KNITTING

Thank you for all the get-well wishes. I’m still flu-laden, and now joined with two sick kiddies at home, I am at least clear headed enough to sit vertical, type and knit. I don’t know where this particular bug came from, but it appears to take 10 days to run its course. An eternity of delight…

For the Love of Knitting

Despite some huge budget problems, my local library is still getting a trickle of new books. Patrolling the new book shelves, I found For the Love of Knitting: A celebration of the Knitter’s Art, edited by Kari Cornell (Stillwater,Minnesota: Voyageur Press, 2004). 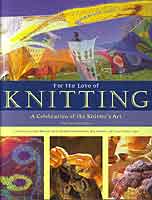 This one is a knitting coffee table book. Big format, copious, colorful illustrations, lots of "name appeal," but little content. It’s a collection of essays by the likes of Zimmerman, , Falick, Swansen, Klass, and other knitting writers. About a third (including the Zimmerman, and Klass pieces) have appeared before in magazines, newspapers, and even in other knitting inspiration books like Knitting Lessons, Knitting Sutra, and KnitLit. I was surprised to see so much material mined from recent sources and reprinted in a book of this type.

While this book is certainly pretty, and the essays are interesting, no one is going to learn anything new from this book. There are no projects. There are no descriptions of techniques. The majority of the pictures are of knitting booklets from before 1960, shots of yarn baskets, archive photos of knitting and knitters, and pictures of knitting in art. Only a couple of the essays have pictures of immediate relevance in them. In terms of garment inspiration, there are a couple of close-ups of some of Solveig Hisdal’s stranded work (taken out of context because the whole garment isn’t shown); plus several shots of "art knitting" – a couple of wearables, plus various soft and hard installations incorporating knitted fabrics. Very little for a book so large and so copiously illustrated.

I also found the editorial tone of the thing got increasingly irritating. An example the caption on a Russian postcard, found on page 50. "Knitting Companion: In this quaint Russian postcard, a young woman keeps one eye on her knitting and another on her cat, who looks about ready to pounce on the next free stand of yarn." I can see the picture. there’s no reason to describe it in the caption. I want to know more about the postcard. Were such things common? When was it made? The style in the picture makes me think it might be from the 1920s. A Russian postcard from the 1920s? There has to be a story there, but there is no further attribution or sourcing for the postcard. Nothing whatsoever beyond showing the picture and then describing it overly cutely.

So if a sample course of essays describing knitting (as opposed to knitting technique), illustrated with patronizingly described eye candy appeals to you, you’ll probably enjoy this rather formulaic book. If nothing else, you may find a first taste of someone’s writing here that would lead you on to her or his other works.

Final verdict: Save yourself the $30.00 cover price. Borrow this one from the library.