In all of this observational and research posting what’s been missing has been reporting on my own projects.

Purists will note that we ended up eliminating the belled lower sleeves.  They ended up being a bit too much for India’s climate.  The thing fits quite nicely.  My only caution is that in the chosen cotton DK it’s quite warm.

I also knit up a small teddy bear as an as-yet ungiven gift.  I used the free Berroco Foliage Bear pattern, and Bernat Mosaic on US #9 (5.5mm) needles.  There’s enough in one skein of multicolor Mosaic to knit at least one more bear of this size.  Stuffing was cannibalized from an inexpensive throw pillow bought at the local supermarket; crafts stores and virgin stuffing materials not being exactly common in Pune. 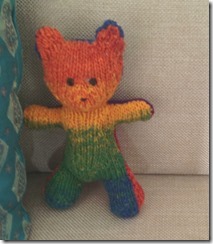 Special thanks to long time needlework pal and multi-century enabler Kathryn, who gave me this wildly bright acrylic skein to share with my kids.  I sheepishly admit that it crept into my backpack, and I diverted it to my own use.

I also finished yet another pair of socks.  I’ve taken to knitting at the bus stop while waiting with Younger Daughter in the morning.  This pair is done, and there is another behind it, well along on the needles: 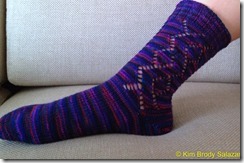 It’s my standard figure-8 cast-on, toe-up sock, but done on log-huge US #1s – 64 stitches around.  The lacy meander on the side is from the first Duchrow collection (page 35).  I’ve used it before on a baby blanket.  These stripy blue socks are also meant as a gift, along with the men’s pair I’m working on now.

And I’ve started doodling with Kasuthi embroidery.  I’ve got a large piece of somewhat even-weave fabric.  Big enough to make a half dozen napkins.  So I am doing a different motif, totally double sided, on each one.  I will stitch all six motifs, then cut apart the cloth and hem the napkins.  Motif Number One is complete: 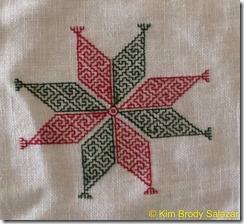 You can see the stepwise logic of the filling pattern in the star flower’s petals.  The resemblance to stepwise Western band patterns (like Jane Seymour’s famous cuffs and Anna Meyer’s sleeves) is even more pronounced in Kasuthi border/edging designs.  A couple of those are on deck for future napkins.  But first, I’ve GOT to do one of the traditional elephants…