On the pattern redaction, Karen suggests that the 1892 pattern is the traditional Print o’ the Wave Shetland lace knitting motif documented in several places. The best example of it is in Sharon Miller’s Heirloom Knitting. The Eunny Jang wave stole pattern I just completed has a variant of it, too.

I reply that this pattern, although clearly of the same lineage, is different. It employs no double decreases, and minimizes the side to side movement of the wave element. I’m on hold noodling it out, between work-related deadlines and holiday preparations with the kids, I had no time to myself yesterday.

On the serendipitous end, the kids are finally old enough and use-specific tools have gotten safer enough to let them loose to carve their own pumpkins. Except for he icky scooping out the innards part (and rescuing the pumpkin seeds for toasting) they did them entirely by themselves this year.

So on hold right now are my Spanish hat; the repair, finish and block of the Wave stole; finishing the decipher of this pattern; plus beginning my holiday gift knitting. I have promised six pairs of socks plus several other small pieces as yet to be determined.

As you can tell from my intermittent posting of late, things are hectic here at String. Work deadlines intrude again into life, and promises made to family members in support of the upcoming costumed festivities eat up additional time. I can report that the mini-pirate costume is done (shown here during the family Halloween party sponsored by my kid-friendly workplace:

On the knitting front, I finished the edging on the Wave scarf, but was unable to do the final grafting and repair yesterday evening because we had no power at our house. Windstorms in our area took down trees and electrical lines. We were out from around 4:00 on. I also didn’t get a chance to burrow into my stash to look for the yarn I wish to use for the Spanish hat.

Instead I toyed with an antique pattern from Knitting Essentials: Knitters Historical Pattern Series Volume One. This is a reproduction edition of Butterick’s Art of Knitting, published in 1892. The editor for the repro edition is Melissa Johnson. Amazon’s on-line peek inside feature gives a good representation of the book’s contents. The particular pattern I was noodling with is on page 19. It’s called “Vine Pattern for Stripe.” In the book it’s described as “pretty knitted in cotton or wool…and may be used as an insertion or as a stripe for spreads, afghans, etc.” I’ve seen some similar things in other pattern books, most notably the zig-zag edges, but not in this exact combo, with the edging done on both sides of a faux cable. 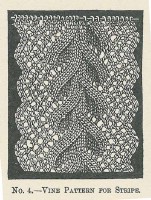 When I saw it I thought it might make an interesting base for a narrow scarf. The directions are in this format, pretty standard for the time:

I graphed out each of the lines as represented and started in on the thing. But like so many old patterns, this one is chock full of errors. That’s probably why it hasn’t appeared in later pattern collections. And the engraving isn’t a literal interpretation of the directions. If you look very closely at the openwork zig-zags on the left, you’ll see they aren’t complements of the ones on the right. They look oddly twisted, without the neat chain like construction of the ones on the right. That’s because the person who knitted up the sample from which the original illustration was drawn used plain old K2tog decreases throughout. You’ll find this a lot in older openwork patterns – the left leaning complement to the right leaning K2 tog was not universally known or used.

In any case, the pattern’s writer did make an attempt to use complementary left and right decreases. The only problem is that he or she didn’t put them in the right places. The pattern as written doesn’t form the neat lines shown, so further redacting on my part is needed. Stay tuned…

Now if only my days were 36 hours long, I’d have time enough to get everything done. And knit…