Where have I been?  Busy, mostly.

I’ve been getting our India-bound household goods shipment organized – buying what’s needful, and sorting the rest out from our domestic inventory.  There are tons of details that have to be settled before we go, and not enough time to do them, of course.

But that doesn’t mean that stress abatement isn’t happening.  I’ve taken to watching Dr. Who with Younger Daughter, after dinner is picked up and homework is complete.  I’ve worked a bit on stitching, but mostly knitting.  Holidays are coming up after all, and there are gifts to be stockpiled. Plus in all of the rushing around there’s a fair amount of “hurry up and wait.”  I don’t do that well, so I always go armed with some sort of handwork.  My big frame isn’t portable at all, so small knitting projects have been accompanying me on my rounds.

So far the tally for September/October is two pairs of socks, four Wingspan scarves (three were my variant on the basic pattern), and two pairs of booties.  The socks below – finished yesterday – are my standard 72 stitch circumference short-row heel/figure-8 cast on toe-ups, with an improvised Old Shale/Feather and Fan variant on the cuff.  The other pair of socks is making its way cross country to Elder Daughter (chasing the first Wingspan, sent several weeks ago), and the booties have been distributed.  The two remaining Wingspans will be blocked this weekend. 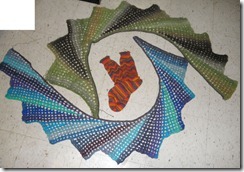 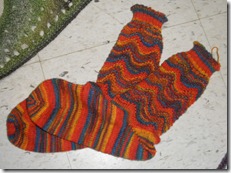 Last night and this morning in the splendor of the Sears auto repair shop waiting room I worked on an old friend – my Kombu Scarf.

I’ve knit a few of these since first posting the pattern in 2004.  The initial one was in Schaefer Little Lola, a space dyed mix of greens and browns, that combined with the undulating shape of the center, gave the scarf it’s kelp name.  Since then I’ve done it up in other yarns, ranging from sport to worsted weight. 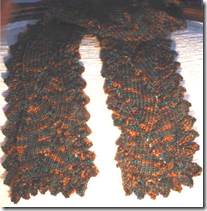 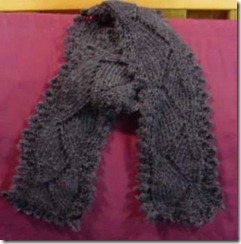 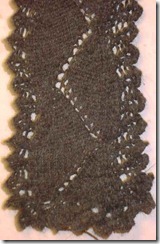 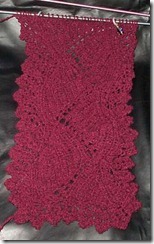 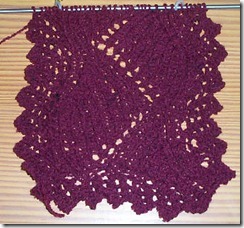 Kombu is a graceful, narrow scarf that can be made from as little as around 280 yards of yarn.  The design is both bold and a bit fluttery.  The pattern knits up well in every fiber I’ve tried (cotton, wool, acrylic, alpaca, cashmere blend). It’s reversible, attractive on both front and back.  There’s no seaming – the bottom edging is knit as a narrow strip, then the scarf body is picked up and knit north from there, with the side borders worked at the same time as the scarf center.  At the end, the final bit of edging at the top is worked across as a finish on the remaining live stitches, right from the needle. There’s no need to sew on or pick up and knit an edging, and if done from a large ball of yarn – there are only two ends to darn in when it’s done.

Here’s the latest. It’s in Marks & Kattens Indigo Jeansgarn – leftovers from one of my all time favorite projects. 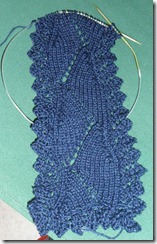 I started this one in part because I needed something on the needles, and I wanted to add to my pile of presents-to-be.  But also I got a shout out from a Ravelry reader who was wrestling with her own Kombu project and needed help.  It’s been a while since I knit one of these, I had to cast on in order to lend a hand.  Happy to say, she appears to be over her problem, and is now knitting away again.

If you’re interested in the Kombu pattern, it’s available as a free PDF download, at the “Knitting Patterns” link at the top of the page.  There’s a German language version there, too.