END OF SQUEAKY; BEGINNING OF VEST

May all your finished objects be received with this kind of joy: 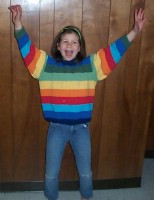 In terms of knitting experience, the Classic Elite Star worked up very quickly. It is a bit hard to knit because of its elastic component. I ended up stretching it as I went along. My stitch gauge was pretty close to target, but my row gauge was off, with more rows per inch than I thought I’d get. The crinkly finished look mostly obscures stitch texture. There’s no point using this for anything much more complex than stockinette or garter stitch. Intarsia type colorwork would work although it would look best with large, clean shapes rather than anything fussy. Stranded colorwork would probably be problematic, because of the uneven appearance of individual stitches, and the gauge complexity of using an elastic yarn evenly in stranding. Still, the yarn was enjoyable to work with. I’d use it again.

I have had very little knitting time over the past two weeks, but 10 minutes here and 10 minutes there, I did manage to finish the sleeves of Smaller Daughter’s Squeaky sweater. It’s urchin-baggy, just the way she wanted it, and I had **just** enough yarn to finish. I’ve got a half skein of a couple of the colors left over, but I used every scrap of dark blue, yellow, dark green and light green – which is why that last light green stripe on the shoulders is only half-height. Not only was I out of light green, but the color itself may have been discontinued. It was flat out unavailable from any of my usual sources, so I made do. The sleeves are just long enough. I may have to go back add length to them in future years as target child grows. Or not if this piece ends up being loved to death before it gets outgrown.

I will not be posting this pattern here. After the last post about it I was directed to KnitNet, where this month a similar looking toddler dress is being featured. Since my sweater looks a little bit like it, I’ll avoid stepping their toes. Besides, no one reported being interested anyway.

Larger Daughter is now clamoring for something. Her tastes run more to camo, black, and khaki – far more aggressive than the happy-unicorn-rainbow suite favored by Smaller Daughter. She has combed through my stash, and come up with this:

The Saba is an old Tahki yarn, probably from the late 1990s. It’s a thick/thin single-ply in construction, 100% wool 89 yards per skein. Recommended gauge is 4 stitches per inch on size 9 US. It’s very soft, and if I had to guess (not being sheepy myself), I’d guess that it has a high Merino content, though the type of wool is not marked. I got this lot for free via the local town on-line discussion list. Someone posted that they were putting it out on the curb, available to the first taker. Being just down the street, I zipped over and rescued the bag of 12 skeins steps ahead of the trash truck. 12 skeins is about 1,068 yards total.

The buttons were part of this year’s holiday haul. I ordered two 95-cent lots of assorted shank style military buttons from American Science & Surplus. Between the two lots, I got enough of three different button types/sizes to furnish four sweaters. This particular group of four bears Air Cadets Canada markings and insignia. The others I received had Soviet stars. My guess is that they’ll eventually end up on other sweaters for this same daughter.

What to make with this yarn? A vest has been requested. Something a bit on the long side, with waist shaping, a deep V-neck and (obviously) four buttons. Maybe with a simple cable running up both sides of the button band, and a hem facing on the bottom rather than ribbing at the bottom edge. Final decision on those last details has not been made. Since this yarn is relatively soft and a single, I am expecting it to pill somewhat. I haven’t swatched it yet to determine optimal gauge, but I wouldn’t be surprised to see that it looks better knit a bit tighter than the label directs. I’d hate to totally obscure the thick/thin texture though.

Open invitation: Style pointers for this project from those of tastes and ages similar to Older Daughter would be greatly appreciated, in part because anything I suggest has Mom-Taint attached. She’s far more likely to entertain suggestions from other sources than from me. The constraints are the limited quantity of this yarn, a rather shapely size 14 target currently in high school, four military buttons, and the basic concept of “buttoned vest with a deep V neck.”

Since my broken-field run through the deadline swarm at work is not lessening, I don’t anticipate quick progress on this project. But I’ll try to document some of the interesting bits and decision points as I go along.

The striped pullover in Classic Elite Star progresses. Karen however warns that in her experience Star can bleed in the wash. I’ll take that into consideration and treat it as a hand-washable.

I’ve completed the body and the collar, and am now starting on the sleeves. 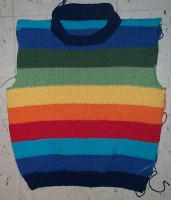 I don’t have any more of the navy blue, so I’ve started the cuffs in the darker of the two greens. They’d make an incomprehensible and boring photo right now, all muddled up on a very springy circ, so I’ll spare you that image. The color progression on them will be (more or less) the same, but because they are three inches shorter, they will probably end with the deep green at the top, too. And yes – I did calculate the stripe widths so that the turquoise one that spans the top of the shoulders and that is seamed up the center is the same width as the other stripes after assembly.

The reason I have only one or two skeins of each color is that this mixed bag lot of Star was a thank-you gift from a friend who works at Classic Elite. A couple of summers ago I pitched in to help her complete several sweaters in their fall line when their scheduled finishers couldn’t make the photo shoot deadline. It’s been stash-aging a while. This sweater will probably end up almost all of what I have – 1 skein of yellow, navy, and light green, two skeins each of all the rest. It’s a good thing I started it now rather than wait any longer. Too much longer and the target child would have outgrown the available coverage.

If anyone is interested when I’m done and can incorporate any notes from production, I’ll post the pattern in this one size.

As I finish up the gray leaf pullover, and wander through the midpoint of a second Klein Bottle hat (solid navy, difficult to photograph), I plan my next set of two projects.

The first of these I’ve already begun. It’s a quick pullover for Smaller Daughter who has now outgrown the Regia Crazy Stripes raglan I made her two summers ago. I’ve mentioned her fascination with her favorite toy before.

Squeaky is still with us, but he’s aged somewhat. His original colors are only a dim memory. The strings on his head were surgically reattached after a regrettable incident featuring scissors. His music box long ago gave up trying to play Born Free (a welcome change); and the retractable leg that triggered the play no longer draws back into the body. His shiny black nose was chipped back to its pink undercoat after being inadvertently slammed by in a closing car door. He’s going bald all over. More suspicious stains than I care to remember have added to his decoration. But he still is a source of comfort and inspiration.

Smaller daughter wants yet another striped Squeaky sweater. I had some Classic Elite Star stashed away, a skein or two in each of a bunch of crayon colors. It’s a cotton bound with lycra. Although the recommended gauge and fiber percentages are a bit different, it’s visually similar to the old Silk City Softball – a nubbly and cozy machine washable cotton boucle that knits up into a soft and interesting texture. In a departure for something I find buried in stash, Star is still in the current CE line. Armed with Sweater Wizard, I’ve noodled up a quick roll neck pullover, knit in the round, sized for a tall 8-year old who wants something with a generous, boxy fit. As you can see, I’m off to a quick start.

Orange, yellow and light green are next (I have no purple on hand). Stars being a lycra-enabled cotton is not necessarily a quick knit though. Care must be taken to always knit it with the same amount of stretch, or gauge can be affected. Also, it’s texture makes counting rows very difficult – something pointed out by the person who posted the Star yarn review. Since my stripes are each 20 rows deep, and it’s a pain to keep track on a separate piece of paper, I’m relying on a little trick to stay on track.

Every five rows (an easily grasped smaller unit), I flip a yarn color change tail to the front or back of the work.

These big “basting stitches” make counting simple – four groups of five and I’m ready to grab the next color. Later when I finish this piece it will be equally simple to tease these ends out to their points of origin and end them off inside.

One caution – this isn’t a yarn that crocks (sheds color on hands and needles). Were it so, I would not use the dangling tails for this purpose. Instead I might use a length of plain white smooth cotton string. That would give me something easy to remove later that would not run the risk of leaving contrasting color marks on the lighter areas. 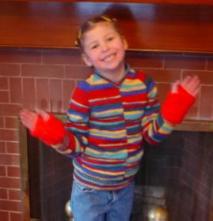