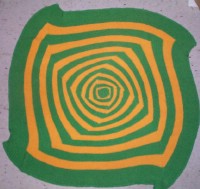 It’s about 47 inches across the center. I used about six skeins of green and five of yellow Austermann Record 210. I had begun another round of yellow but I didn’t have enough yarn to complete the next progression, so I ripped it back, opting instead to use up all available green for the outer, larger framing section. Obviously, I haven’t attempted blocking yet. Cotton yarn as a rule does not deform as well under blocking as does wool, and this dense cotton in particular has a mind of its own. I suspect I’ll have to pin this to within an inch of its life, then steam block it rather than just damp blocking. But that’s an exercise for another day. Even if I don’t get around to it, the odd shape (although unorthodox) isn’t unappealing.

In other knitting news, I continue to slog away at the spiderweb section of my growing olive green tablecloth, but pix of the standard indistinct and blurry snood shape object won’t reveal much beyond the fact that it still exists. Also I was tempted too long by the skein of Noro Kureyon Sock Yarn that’s been sitting atop my monitor since I posted about its acquisition back in July. I had thought about doing something unusual with it rather than just socks, but the lure of those colors proved too strong.

At that time I bought it I posited that each color area would last about three or four rows in a sock. My instinct was more or less correct, but the yarn has more transitions and in-between gradations than I expected. Knit up, the color sections look like they last much longer, but if you examine closely “pure” colors do last for about five or six rows before they begin transforming into the long “tweener” blend areas:

For the record, I’m using 00s, and am working at the relatively large gauge (for me) of 8 stitches per inch. Although I usually prefer my socks knit tighter, this yarn is a bit heavy compared to the sock yarns I usually use. It’s also a single, with a fair bit of unevenness – some parts are thinner than others – and a fair bit of overtwist. The overtwist can be a pain because the yarn will kink up on itself if a long section is drawn from the skein. I’ve also noticed that other knitters have complained about Kureyon Sock’s feel, thinking it a bit on the coarse side. It is hard on the fingers as it is being knit, but the resulting sock at my gauge is nice and cushy and feels much softer than palpitating the skein promises.

This pair won’t be finished any time soon. Now that the first sock has been kicked off, I’ve relegated it to “briefcase project” status. That’s the small, portable project I keep on hand to knit at doctors’ appointments, while waiting on line at the post office, and other stolen oddments of time. My socks will be done. Eventually.

Two steps forward, one step back.

A minor scuffle on the OpArt baby blanket. I had decided to finish it off after an 8 ridge yellow and 9 ridge green garter section. I knit away at my yellow, and was just at the beginning of my last knit row of yellow when I reached for my final skein of yellow yarn.

Unfortunately, I had miscalculated. Although I was sure I had equal numbers of yellow and green to begin with, and have used more green than yellow, there wasn’t another yellow to hand. A frantic stash hunt turned up no more. Since that last yellow stripe as-is would interrupt the vortex effect, for want of about 40 yards it had to go. As a result I am ripping out the final yellow band, and will finish out the blanket with a wide edge of either green (widening the existing green stripe), or screaming orange (using up all three remaining skeins of the stuff).

A caution to those working the thing. The ever increasing diameter and stripe length conspire to play havoc with one’s running estimate of yarn consumption. Those outer stripes eat a lot of yardage. Don’t be surprised if you run a tad short like me, if like me you throw caution to the winds and sub in a yarn of different gauge.

Monday’s post inspired a rare comment here. Lillian sympathized with the flock of ends problem that this blanket poses, and suggested a method for beginning/ending strands that I hadn’t used before. Thank you!

The back to back join as described by TechKnitting is a very useful method, and is an excellent one to have in one’s bag of tricks. I would be extremely useful for joining thinner yarns, woolly yarns, and for adding on a new ball when spit splicing isn’t possible because of fiber content. It’s new to me, but it will be something I’ll be playing with in the future. But it didn’t work out well for me on my blanket.

This particular project adds two complications that limit the effectiveness of the back to back method. The first is the yarn I’m using. It’s a very dense, round cotton, made up of a zillion little hard strands. As a result, it’s difficult to compress easily. The distortion produced by the two-strands-thick change-over stitches stands out very prominently on both the back and the front. The second is that the first stitch of a new color stripe is also the stitch that bears the row increase (either a k1 in the back and front, or a p1 in the back and front, depending on the garter stitch row being worked). The double strand distortion is magnified in that increase stitch, making a very prominent lump, visible here at the stitch marker:

Given my yarn choice (and remember that I’m not using the medium lofty washable wool as recommended by the pattern’s author), the best, most invisible method for working in the ends is the old fashioned method of darning them in locker style – thread yarn through backs of stitches in color in one direction, snick up any looseness, then reverse direction and pierce the same strand on the return trip, burying the yarn into itself before snipping off. This does leave a small caterpillar like lump on the reverse side as a slight thickening of a garter ridge, but is totally invisible from the front side. Here you see the reverse, with two green caterpillar end-offs in the center.

In my particular case, an even more invisible treatment is to take advantage of the nasty splitting habit of my chosen yarn. If I take my darn-in end and split the plies into two bundles, then darn each bundle in separately (and in opposite directions), the resulting caterpillar bumps on the reverse are smaller and less noticeable. My pix of that refinement will have to wait until tomorrow.

The OpArt baby blanket continues to grow. Being all garter stitch with very obvious markers to wake the fingers up when the four increase points are reached, it’s an autopilot project, ideal for knitting while watching subtitled movies:

Right now it’s approximately 22 inches across, and I’m not finished with the second 6-ridge (12 row) set of stripes. The pattern continues on for four more stripes, one each of 7, 8, 9, and 10 ridges, alternating colors (a larger size goes on for two more stripes of 11 and 12 ridges respectively). I’ll keep going until I either run out of yarn, or I feel the thing is big enough to be a lap/basket/car seat blanket – at least another two stripes. The jury is still out on whether or not I’ll end off with one last stripe of orange. The Record 210 yarn is holding out fine. I’m on my third skein of each color, and have at least two more of each as yet untouched. I did hit a couple of poorly plied spots in one skein of the yellow. They were bad enough to excise rather than work in, although that made even more ends.

For the record, given the vast number of ends, I’ve been finishing them off as I go rather than waiting until the knitting is complete. I strongly recommend doing it that way, unless you’ve got a “finishing party” to go to.

What subtitled movie was I watching? Sansho the Bailiff. It’s from famous Japanese director Kenji Mizoguchi, made in 1954. It’s bout the development of compassion in a brutal time. In the movie the family of a noble minded official is torn apart, and the children grow up in the most wretched of circumstances, yet maintain their absent father’s ideals. An excellent film, but very affecting. Bring a box of tissues.

The amazing flood of fecundity exhibited by my friends and co-workers has not yet crested. More baby gifts are required. Being at this moment long on leftover yarn but short on inspiration and time I was delighted to notice something simple and clever in Knitty. Melissa Dominguez’ OpArt baby blanket fits the bill. It’s similar in principle to the Centerpiece Treasure pattern offered by Lion Brand, which I believe was a licensed outgrowth of a square published in the first Knitters Magazine Afghan competition in the spring of 1995. All are squares knit center out, relying on a simple non-eyelet increase in the corners to create a spiraling effect, and stripes in multiple colors to magnify the visual spiral effect. Melissa’s very successful bit of cleverness is to graduate the width of the stripes in the spiral throughout the piece, and limit the colors used to two. That takes the pleasing but static swirl and gives it depth and a striking appearance very true to her Op Art inspiration.

Diving into the stash of remnants, knowing that exact gauge doesn’t matter in this type of project, I came up with some Austermann Record 210 – a non-mercerized cotton. It’s listed on the label as Aran weight (18 stitches/27 rows =4 inches or 10cm), but I found in the past that it knits up closer to Worsted (20 stitches = 4 inches). I used it before to make my citrus-color Ridged Raglan pullover from another pre-2000 issue of Knitters, back before they fell into their current self-referential rut.

210 is a durable matte-finish cotton that holds its color and shape through repeated washings, after a small bit of shrinkage in the first wash. It’s biggest drawback is that it’s composed of lots of small plies and isn’t very tightly twisted, so it splits like crazy while being worked. I’m using US #6s (4mm) and am getting a gauge of 5spi in garter stitch.

I’m pretty sure I have enough of the lemon and lime to make up a small crib or travel size throw. If not, I’ll figure out a way to introduce the orange. Perhaps as a framing stripe around the outside. In any case, the thing is already on its way: 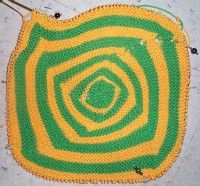 You can see Melissa’s spiral effect and illusion of depth already starting. You’ll also note the one bit of annoyance inherent in this type of pattern. Each stripe means two ends to finish off. I’ve ended off the first four stripe’s worth so I could see the joins would look, but you can see the chain of holes at 2:00 – each one signaling two more strands to tame.

I’ll keep going on this one until I run out of yarn. At that point, it will be big enough. Thank you Melissa!