Friday’s post on twisted joins in circular knitting seems to have hit a chord.  Go back and look at the comments because (beyond commiseration), there’s good advice there.

On another note – I ripped back yet again.  I had about eight inches done when I decided that the tube I was forming – even with some augmentations I was planning, would not be wide enough for my purposes.  It flashed nicely, being only two repeats of the original skein’s circumference, but to use it to fit me, I’d need to steek and cut both sides and introduce a large vertical strip of some other yarn.  Kind of like this: 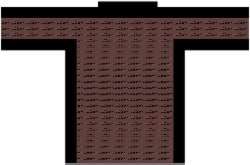 I thought about how that would look on me, and I decided that I’d probably look like a filleted iguana.  So I’m going for a three-repeat tube.  It will be roomier, but the flash effect isn’t as crisply defined. 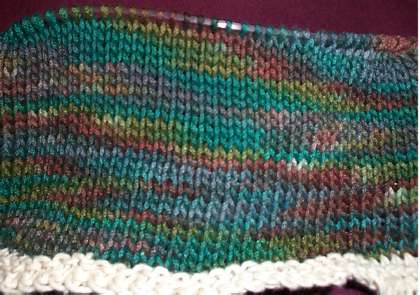 Why is the flash muddier?  Because of the short runs of color in this skein and the fact that stacking areas are now three repeats away from each other instead of two (further apart in the skein when dyed means less match up strand to strand).  Two or three stitches off cycle is enough to skew the flash into a narrow diagonal because most color segments are five stitches or fewer.  Still, there is pooling and massed effect striping instead of one-row tweedy short-repeat randomness going on.

So one step forward, two steps back.  Again.