A small holiday this year. Long time readers may remember that I usually bake at least 10 kinds of cookies for the Hanukkah/Christmas season. This year work expanded to eat most of my prime baking weeks, so my cookie plans were diminished. This year’s set is all tried and true family favorites, with no experiments or departures into the unknown. I’ve managed to make only these:

Plus panforte (two cakes as gifts); and the usual super easy condensed milk/bittersweet chocolate/butter fudge. I will say that I did something new on the fudge. I roasted some whole almonds leftover from the panforte then mixed up the fudge as usual. But instead of ladling it all into a square baking pan to harden, instead I hauled out some bendy silicon oval baking forms:

and tossed some nuts in each cuplet, then filled each with the fudge mixture. When all had hardened in the fridge, I popped out these: 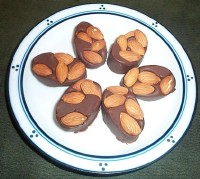 All in all, a much nicer presentation than the squashed looking, inexpertly cut squares that usually result when I try to slice the cake- pan-produced fudge block.

In other news, the camo valence curtains have been finished. Pix await the teenager’s room being tidy enough to photograph. Another pair of gift socks has been completed, and the rest of the holiday preparations have been made.

Since tonight is Latke Night, in the spirit of the holidays I share (again) my family’s latke recipe. I first posted this 1995 as a gift to the old pre-Yahoo KnitList. It’s been collected in a knitters’ recipe collection since. 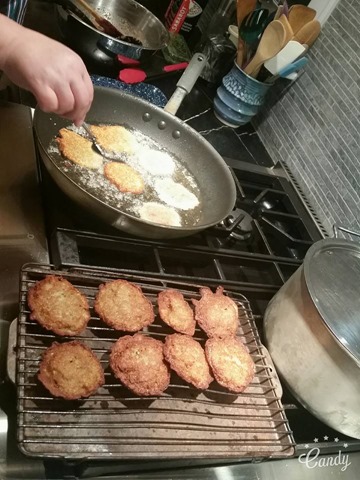 1. Every family does it differently.

2. Every family’s latkes are the best.

Latkes (sans sour cream) were a common accompaniment for meat leftovers that might not otherwise be enough to go around. Latkes (with sour cream) were the center of a traditional dairy meal.

Latkes work best when the potatoes are old because old spuds are more watery and brown better than new ones, probably because their starch has begun converting to sugar. Grandma’s general rule of thumb was

eaters-1 = number of potatoes, and

You can’t make this for one eater.

Ingredients for five eaters as a major side dish:

Grate the potatoes on the side of the grater that produces mush. You don’t want potato shreds, you want potato slurry. I’ve not found any modern kitchen appliance (including the Cuisinart) that can produce the correct consistency. Also, I’ve never made these without skinning at least one knuckle. This is where the Band-Aids come in. 🙂

My grandmother peeled the potatoes first. I don’t. She was horrified by my oversight, but I notice no difference in the finished product between the with- and without-peels versions. The potato mush will turn ugly gray-brown- even if you’ve bothered to peel. Don’t worry, this also has no effect on the finished product.

Mix in the eggs and salt thoroughly. Add some of the flour and about a third of a cup of water. Wait about 10 minutes for the sludge to absorb the water and flour.

Now comes the hard part. The mush should be very thin and watery – far more watery than pancake batter. Since potatoes aren’t uniform in starch/moisture content, the exact amounts of water and flour to add to get to this consistency can’t be predetermined.

Heat oil (about 1/4 inch deep of oil) in the frying pan or pans – I use two small saut pans on separate burners because my stove won’t heat a big pan evenly.

Spoon a dollop (about 2 measuring Tbs worth) of the potato mush into the hot oil. If the batter is thin enough and the oil hot enough, the latke should spread out and have thin, lacy edges. Adjust the mush, adding more water or flour to achieve these results. If the latkes are too watery and the oil too hot, you’ll just get potato splatters, not things you can pick up and eat. If the batter is too thick or the oil is too cool, the latke will keep the shape you spooned and be heavy, greasy, and patty-like.

Fry latkes in batches of two or three until they are golden brown on the first side, then flip them over. I use a fork to stab and flip rather than a spatula because if the latke is too soft to spear, it isn’t ready to turn.

Replenish the oil as needed. The ideal Leibowitz latke is very thin with a wide crispy edge. When hot, it should be too crunchy to fold in half.

Grandma drained the finished latkes on paper towels or brown paper. I find they get less soggy if they are drained on a wire rack.

Serve immediately with cold sour cream or applesauce. When my grandmother made these we kids would sit around the kitchen table like baby birds with mouths open wide, waiting for each pan full to be done.

In accordance with Latke Rule #1, some families grate a small bit of raw onion into the mix. Others serve the latkes and sour cream with a very generous sprinkle of chives on top. Other families go for the sweet and spike the applesauce with a healthy amount of cinnamon. A friend’s family serves latkes with an apples stewed in honey-water dish I’ve never seen anywhere else. Other families belong to the “potato shreds held together with potato starch or flour and egg” school. These are good too, but they are not *the best* (see Latke Rule #2).