STRING ON THE MARCH

Yup.  We were there with everyone else on Boston Common, for the rally and march on 21 January. I knit hats that travelled to DC and Kansas City, too.  These photos were taken by Elder Daughter, who knows her way around a camera.  Sadly there are none of her, because she spent the day behind rather than in front of the lens.

First my favorite marcher of the day: 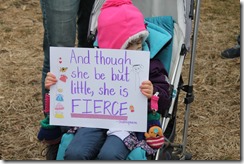 We arrived early, around 10:00, and found the common already full.

Elder Daughter plus friends Christine and Matt and I found a place to stand at the rear center on a small rise – close enough to hear and see the large screen, but not the speakers themselves.

Christine and Matt made us a nifty banner:

The crowd was upbeat and considerate, supportive and non-confrontational.  There were no vendors outside the Common hawking tatty merchandise.  A few groups produced and carried similar signage, but the vast majority of hats, shirts, sashes, banners, and signs were home-made.  Some were quite funny, others strident – but all were from the heart: 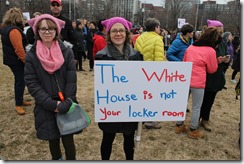 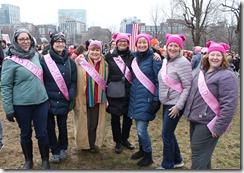 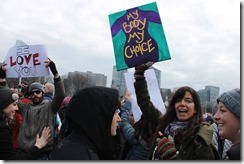 There were so many people packed onto the Common that it took us almost two hours to walk the 30 yards from where we were standing back to the street.  We set out on the march route, in roughly the first quarter of the people walking, and noted that by the time we completed the circuit at 4:00, there were still crowds exiting the Common, just starting out. 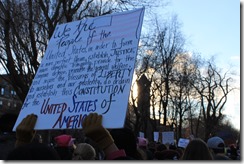 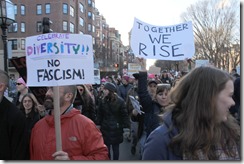 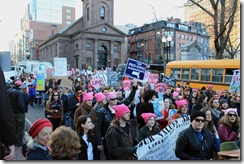 Elder Daughter’s best shot of the day, taken mid-march.  The route was lined with people cheering, some on balconies: 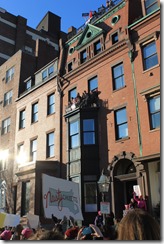 The carillon in the Baptist Church we passed rang out We Shall Overcome, and the national anthem.  There were at least two walking groups that accompanied themselves with music – a group made up mostly of Revolutionary War era re-enactors who brought fife and drum, and marched in cadence, wearing proper attire behind their own Phrygian-capped Lady Liberty.  There was another group with steel drums whose beat was a bit more syncopated, and whose spirit could not be denied.

Police presence was benevolent and in many cases, charming.  We saw more than one officer assisting the disabled, or taking photos of marchers for them.  Heavy sand spreaders, and DPW construction and sanitation trucks were used to block side streets.  While any barrier would have kept the march on course, those massive trucks were there to protect us from vehicle attack, with their drivers putting themselves in potential danger.  We on the route noted this, and share special thanks to all the public safety personnel.

At the end, back on the Garden and Common, many people left their signs along a fence:

I am proud to have been part of this, and note that it is just the first step.

Involvement does NOT end with this march.