As you can see, I’m making slow progress on my counterpane. 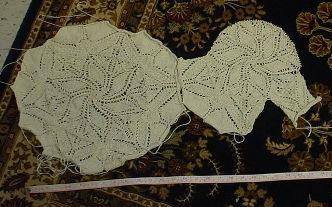 Athough you can’t read the tape measure, one meta-unit unblocked measures around 15.5 inches across.

I’ve started the second motif, and done the hex,? half of its
squares, and one triangle. Here I’ve lined up the two as I intend
to sew them together. I will need a fourth motif when I finally
get enough done. It will probably be a solid stockinette
triangle, to go in this spot: 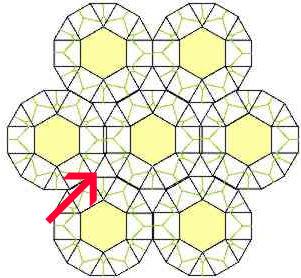 Either that or I need to engineer something with lines of YOs that match up with those on the bordering squares.

I did spend quite a bit of time trying to make a triangle knit from the
tip down that is as close as possible to the one I’ve got that’s knit
from the base up. So far no dice. I just can’t get a
congruent pattern on the rows that use YOs and double decreases in the
original. My triangles end up being rather rotund, and I lose the
lacy openness of my original. Plus the nifty lines formed by the
YOs are shifted somewhat, and no longer align with the squares when all
is to be sewn together. My counterpane will have to remain
assembled from lots of smaller pieces. Perhaps the next one I
play with will be an honest dodecagon rather than this assembled one.

And for those who have written to say that I’m a crazed loon for trying to knit this higher complexity tesselation instead of sticking to plain old squares or hexes, you’re not telling me anything new. Go play with geometry.