Yesterday’s entry on the KFI/Noro Kureopatora Plus
provoked much curiosity about that yarn. What I have is left over from
my Taco Coat. I bought a bag of about 12 balls at a seasonal clearance
sale at my local yarn shop back in 1996. It sat for a half year waiting
for a project idea to ripen. It ended up being the color accent in my
original Taco Coat. The other two yarns used on this project were Cascade Lana d’Oro alpaca blend in black, and Reynolds Tolouse, an ancient black Astrakan textured yarn.

I
used about 9.5 balls of my original 12 Kureopatoras. The 2.5 shown
yesterday are all that remain. I don’t remember the yarn as being
particularly cursed with knots. Maybe one or two balls had a knot in
the whole lot, and no ball had more than one. I do know that at the
time it was available in a couple of color sets, with the one I used
being the most eye-popping. Two others I remember were mixed browns,
khakis and olives; and another that was a set of various blues.

Another
question was on softness and full/felt-ability. Having now tried it, I
can say that there’s enough wool content in this wool/cotton blend to
spit splice. It is possible that it would full. Experimentation would
be called for, although with limited availability I’d prefer not to
spend my yardage doing so. Also, while it is less scratchy than
Kureyon, it’s not Merino soft – not by a long shot. This is an outside
the coat scarf, not something most people would snuggle up next to
under their chin.

All in all, Kureopatora Plus was ahead of its
time. It was sold under the KFI (Knitting Fever) label, not the Noro
brand. It came out well in advance of similar yarns today, with very
little exposure or pattern support compared to its later siblings Silk
Garden or Kureyon. In fact at the time people were rather mystified
about how to use it, and appreciation was limited. As a result it got
added to many people’s stashes but wasn’t knit up. You can still find
it stash aged Kureopatora every now and again on eBay, although I have
to say I rarely see any in the color #982 screaming rainbow mix I’m
using.

Progress on the snake-like scarf: 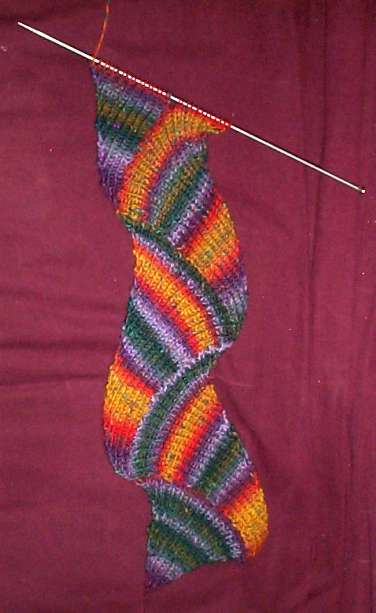 It
does a bit of the side to side salsa slide than do most other scarves
of this type. The biggest reason for this is my working this up in
ribbing rather than the more usual garter or stockinette stitches.
Ribbing draws in. You can see how it fans out like a lotus flower where
the entrelac attachment "seams" stretch it. I like the effect.

Jury
is still out on whether or not I’ll end up edging this piece. If I do
it will be in a very narrow sawtooth or point edging – small enough
that the colors of the edging will change every point or two. In terms
of yarn consumption so far, I’ve finished the third to half ball I had
left over, and I’ve cracked into the first of my two untouched
Kureopatoras. We’ll see how long the scarf is after I’ve finished most
of that ball. If it’s long enough, I’ll do the edging with the remains
of it plus Ball #2. If not – someone is bound to appreciate a Dr. Who
length rainbow squiggle.