This post comes under the heading of "Bragging Parent."

Elder Daughter’s school hosts a math fair every spring.  Much as in a science fair, students are encouraged to create exhibits detailing concepts, or offering up research or practicum results.  The only stipulation is that they have to involve math.  One of the suggested topics this year was "Math in Everyday Life."  Suggestions for this topic included documenting the math inherent in a cooking or hobby project.  Elder Daughter chose to do hers on the math required to create a mini-sweater.  Evil OverMom made sure she got lots of pencil time in doing so. [insert bwaa-haaa-haa sound effect here.]

She decided to take Mr Bunn (her first toy), and outfit him with a pirate motif sweater.  She did some fashion sketches, and searched the web for a pirate motif.  She found one on a wristband offered up by MagKnits. 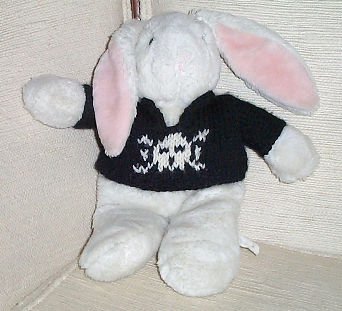 To start, I gave her a tangled pile of yarn, of undetermined yardage and gauge.  She rolled it up, weighed it and used a McMorran Balance to figure out her yards per pound.  Lots of conversions between grams and pounds ensued.

I then had her measure Mr Bunn and draft out a proportionally designed pattern.  There were percentage adjustments for ease, plus determining the length of the T-slit for the neck hole using Pythagorean geometry.

Then she did a gauge swatch, weighed it and figured out her yarn consumption per unit area, and based on that – whether or not she’d have enough yarn to do her project.  (Obviously I made sure that she would, but let her figure it out on her own).  More ounces, grams, pounds conversions!
After that she used that same swatch to determine row and stitch gauge.  Averaging here, as she took several measurements at different spots on the swatch to get more accurate figures.

She used multiplication and ratios to translate her pattern and her gauges into actual stitch count directions.  Then she drafted up a to-scale final pattern schematic.  Finally, she mathematically determined placement for the motif.

And then she knitted the sweater and did up her poster, documenting all of the equations and methods she used.  (The poster is still at school).  On the day of the fair she manned her mini-booth and explained all of this to the judges.

I regret that in spite of effort and originality, Elder Daughter didn’t win one of the coveted few prizes.  But that’s a mom talking.  She did get an excellent grade on the project from her  teacher.  Also she learned quite a bit about design, data conversion, and drafting, had fun with applied math, and is now talking about designing up a person-sized sweater.  All of which make her a winner in my book.