O.K. I’ve found a mistake in the FANDUGEN pattern. It appears to be in the original Danish pattern, and is carried through into the uber-accurate translation posted on Nurhanne’s Yarn Over website.

It’s a simple transposition of the k3 unit and the double decrease. It’s very evident in the photo that accompanies the pattern that the area of small roundels at the top of the tulip like unit contain three little round units, and that the outer two of each triad are finished the same way as the innermost one. If you work the pattern as written, the little circles aren’t finished off nicely with that center double decrease. It just doesn’t look right and the oddness in logic leaps out at the knitter immediately.

Here’s the result so far, schlepped around the house to find something light colored against which to take the photo: 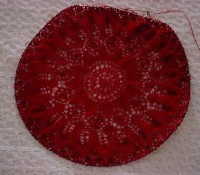 And a detail shot: 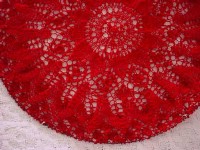 On the UK usage of “single crochet” I admit that it’s very rare today, but it’s not unknown. Especially in historical patterns. If I had the time I’d comb through my collection and find examples. I know that I’ve worked my way through this problem more than once, having made the erroneous assumption that because I saw the term “single crochet” the rest of the pattern’s nomenclature must be American usage. I learned long ago never to say “never.”