YET ANOTHER RED DOILY

After dithering about finishing off the red doily with a sawtooth or similar style edging, I decided to end it as the pattern recommends – with two rounds of simple chain loops. Here’s the result. I haven’t blocked it yet. That has to wait until Elder Daughter returns from camp. Why? Because the checked sheet I prefer to use for precision blocking is part of her sleep-away camp accouterments, and I have to wait for it (and her) to return. 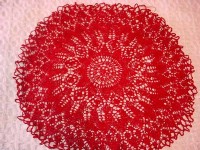 I’m happy with the result. It’s about 15 inches across, pre-block. I ‘d like something larger, but I do have a perfect spot for this one. It’s serving its doily-emergency mission right now, but will soon be sidelined to another use. So that means that having found out that doilies are the potato chips of lacy knitting, I get to do another. (Now I understand those houses that are covered in the things.) You can see that I’ve begun:

This one is from The Complete Works of Rachel Schnelling, a leaflet compiled by Gloria Penning of that designer’s patterns (On her website, Penning writes that Schelling probably translated patterns by Christine Duchrow). I bought this leaflet direct from Gloria about seven years ago and am just now getting around to playing with its patterns.

My new doily is built on an octagonal rather than hexagonal logic. The pattern itself might be a bit daunting for some, although it’s really not difficult once you get the hang of the thing. Unlike the one I made last week that was written up in prose directions, this one is graphed. But with an idiosyncratic notation system all the author’s own. Stitches are shown as boxes, with SSKs represented by a boxed letter D, K2togs as a boxed letter T, and YOs by a boxed letter I, etc. Unlike my preferred graphed notation, no effort whatsoever is taken to relate the visual presented by the pattern to the actual appearance of the knitting. Margins of the repeat wander right and left in synch with the knitter’s repeat rather than the way the finished item looks. Edge notations indicate rows on which the graphing shifts over a stitch or two. Heavier outlines are supposed to unite visual elements, but (to me at least) do little to introduce clarity.

This is not to say that the patterns are inferior – they’re not. They’ve e got the nice, crisp lines I like, and (once you’re used to the notation) are very easy to work – just knits, K2tog, SSK, YOs and double YOs, with all patterning restricted to the even numbered rounds. So far the thing has been error-free and both quick and enjoyable to knit. Plus the round motifs come in several graduated sized sets. For example, in the piece above, the outer pineapple-like areas grow out to become petals, making an eight-petaled flower. The smallest finished object stops there. Then there’s a second tier of design, after which the second largest finished object stops. And so on until the final full tablecloth sized expression. I’ll stop somewhere after the piece grows sufficiently large.