As you can see, I’ve made a fair bit of progress on my 1941 man’s vest. Here is the completed back: 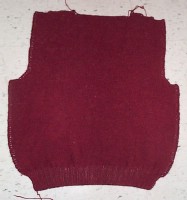 The color is a bit darker and more heathered with a touch of gray than is the virulent cranberry reported in the photo.

Now to go from the original size 30 to my customized 46, I did a couple of things. First I measured The Resident Male and one of his favorite store-bought vests. Then we sat down and discussed what he liked and didn’t like about the historical vest. We came to this set of observations

So comparing his measurements and the original I come up with

So I plugged my measurements into the original pattern, multiplying by the original gauge (which I achieved), and came up with the piece above. I knit the back first so I could become familiar with the armhole and shoulder shaping before adding the complication of the vee neckline. I also knew that because it has no vee, the back would take more yarn. If I consumed more than half of my yarn while knitting it, I’d know that I needed to buy another skein. As it was, I used two and a quarter skeins out of five, so I should have enough to finish.

To confirm my noodling (and because I had the tool at hand), I pulled out Sweater Wizard and typed my measurements into that, too. I came up with a pattern that was very close to my own hand-tinkered one – minus the erasures and bogus false starts. If I end up sharing the redaction, I’ll use the Sweater Wizard product for clarity and ease of use.