I’m back in place after a horrific spate of work-related deadlines, followed hard by a much needed vacation and its attendant flood of post-vacation laundry. We visited with family; took in the warm, sunny, Florida weather (in spite of all the locals shivering in what they perceived to be a cold snap); played golf; ate way too much; watched the kids splash at beach and pool; and tried to stay away from work and eMail.

I even had time to do a little bit of knitting, but I did not bring Older Daughter’s vest with me. I have finished the back and am about half-way through the vest fronts. With just the armhole/neck half left, a fair bit of blocking would be required before I could play with finishing and adding on the trim. Since there is generally not enough room on aircraft for aggressive blocking (or aggression of any sort), I left that project home and took the Galaga hat instead.

As you can see from this one-handed shot, I’m moving through the thing. It’s slow going, with a fair bit of more than two color stranding involved over 9 stitches per inch. 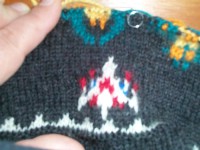 I used a provisional cast-on, then knit a plain gray self-facing about three inches deep (approximately the height of the first two courses of the motifs. Then I worked two purl rows as a turning edge, and the white triangles as the first visible bit that will be seen after the self-facing is fused back into the hat body. I placed two white ships on either side of the hat.

On this side the first course of bug-enemies will be in teal, using the larger bonus ones from the game – one splayed and one flapping. The other side has three, set somewhat skew to the ship. After this course is done, I’ll fuse the facing, then do a decrease and work the next tier. It will also be the larger bonus enemies, but in the other color combo. After that will come another round of decreases, and several tiers of the shorter non-bonus bugs. In between each tier will be another decrease round.

My biggest complication is that I am very short on the colors. I’m using scraps of Frog Tree Alpaca left over from Older Daughter’s rainbow hat and scarf. That’s why the enemies aren’t marching in full continuous rows around the whole hat. It’s also why I’m not working this truly in the round, although the piece is on circs. Yes, the piece is seamless, but I’m muddling my way through a variant combo of stranding and Intarsia in the round. On motif bearing rows, I’m working a knit row across all my stitches. When I reach the end of what would be the round instead of going forward and continuing in knit, I wrap that first stitch, return it to the left hand needle, then turn the work and head back the way I came. When I reach the end of this purl round, I purl the final stitch along with its wrap, wrap the next stitch (on the next needle). Then I return that wrapped stitch to the left hand needle, flip the work over, and head back on the knit side. When I get to the last stitch of the row, I knit it along with its wrap, wrap the next – and so on.

What I’m getting at the joining point is a bit of a thickening that were I working in a lighter color, might be more visible. But in my plain charcoal gray, it’s not very evident. This may not be among the approved methods for working something seamless on circs, but employing both knit and purl rows, but for me and for this project it’s fine.