First, let me reassure everyone that it’s not my intent to supplant the need for the books I’ve been using lately. I strongly recommend that people interested in lacy knitting buy them, and have as much fun learning to knit from them as I am having. But I also realize that it’s very daunting for many people to think of picking up a book in a language they don’t read, that uses an unfamiliar symbol set, and that can be full of unexpected differences from modern knitting logic (to the point that would be thought errors in modern books.) Mining these older works for usable ideas is a form of Extreme Knitting* – one that I want to encourage more people to try. I hope these posts help bridge some folk over to beginning their own explorations.

For example, here’s another lace redaction problem that turned into a paddle in the lace design pool.

I intended to finish out my black lace doodle scarf with an edging appearing in the same book as the insertion strip I modified for that scarf’s body. But the graph of the original isn’t quite logical, especially when compared to the engraving of the finished item. The edging I originally intended to use is on page 12 of Knitted Lace (Kunst Stricken) by M. Niedner anf G. von Reden (edited by the Kliots).

If I flat transcribe each of their chart symbols into modern notation, I get the chart in the diagram below (click on it to make it bigger).

Although the chart looks good, it’s not knittable. Not if you want to make an edging that looks like the one in the engraving. Why? Look at each graphed row. If you count up the increases (the YOs) and the decreases (ssks) you quickly find that there is an equal number of both in each row. That’s perfect if you’re doing a straight insertion with parallel sides, but this is supposed to be a dagged edge that grows and shrinks to make triangular points. In order to achieve the ragged left edge indicated the stitch count should increase or decrease each row. But you say – it does! The little points are being formed. MY point is that there is no indicated origin for those extra stitches. For Row #3 to have one more stitch on it than Row #1 as shown, there should have been an increase without an accompanying decrease on Row #1. Otherwise that stitch just appears **poof** without a logical point of origin.

Now, if we want to knit this edging, we need to add that missing stitch. In fact, if you look at each and every line of the pattern you’ll see that there’s either a missing increase or decrease on each illustrated row. We need to put them in.

There are several ways to make those corrections. The simplest is to leave out one strategically placed decrease somewhere on the “growing” rows (working the two stitches involved as plain knits); and to introduce one somewhere on the “shrinking” rows (working two stitches shown as being knit as a decrease). Another fix would be to make up the differences on the interstitial even numbered rows. A third method would be the most noticeable – incorporating the corrections as visible additions to the pattern, in effect, editing the pattern to introduce new eyelets or decreases to form a new design element.

Now. Where to put them? Again looking at the original graph, you’ll see that the only area that changes is the part I marked in blue on the original chart (the original didn’t differentiate these stitches in any way). Other than growth/shrinkage in that triangle area, the pattern is stable, alternating between two design rows – the unshaded area shown on Row #1 (repeated on 5, 9, 13, 17, 21, 25, and 29) and the unshaded area shown on Row #2 (repeated on 7, 11, 15, 19, 23, 27, and 31). Obviously all of our edits will have to take place within the blue shaded area. Even with those edits, the heavy reliance on only two pattern rows means this will be an easy pattern to memorize once we’ve noodled out the missing bits.

I began experimenting, although I fizzled out along the way, having lost enthusiasm for using this particular trim. But I did produce a workable solution. It relied heavily on the original chart, modifying some of the decreases on the growing rows and adding some on the shrinking rows: 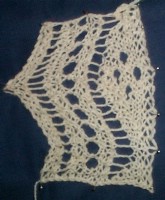 As you can see, while my yarn choice for this swatch isn’t optimal (something lighter would conform better and shape itself more fluidly up and over the triangle’s point, it did work. It also looks pretty close to the original. But not spot on (more on that below).

I tried mightily to make the mods on the off-side rows piece work. In theory it sounded feasible. It would have worked, had there not been the flower-like quad eyelet structure in the point of the base triangle. Adding/subtracting stitches at the right edge (the straight edge) perturbed the placement of the eyelets and lost the symmetry of the feature. Putting those additions/decreases elsewhere by adding/subtracting stitches along the pointed edge of the base triangle produced a clunkier, more clumsy finished product than did working them in on the right-side row.

I have to admit, I didn’t bother with the increases as a decorative element step. To do that I’d have had to widen the pattern as a whole, and introduce a YO after the slipped stitch on each odd numbered row. On rows 19-31 I’d have had to follow that YO with a double decrease (removing one stitch to compensate for adding the YO, plus the one stitch needed to shrink the base triangle . Contemplating the result of the second scenario above made me think that this arrangement would also run afoul of that quad eyelet flower. Between that and realizing that this pattern wouldn’t be a good compliment for the design of my scarf’s body – I ran out of enthusiasm to keep fiddling with it.

Oh. The final straw? Examining the pattern chart, the engraving of the pattern and my knit sample, and realizing that the chart as shown (and that I knit – more or less) wasn’t the same as the engraving. That clearly shows four courses of eyelets, not three, plus two rows of crocheted picots. The picots I can forgive, especially since I can noodle out just enough of the blackletter-style German text to determine that instructions for it were included in the prose. Here’s the chart for my successful result, plus a posited modification to produce the four-course pattern shown in the book’s original engraving. I haven’t actually knit up the lower chart yet, but it should work.

I’ve run into these problems several times in these older pattern collections – both the lack of correspondence between chart and illustration of the final product; and basic charting that doesn’t produce the desired result. I’ve found it’s always a good idea to proof the rows in a pattern – especially one from a historical source – before sitting down to knit, and if knitting from an unproven vintage source, to always swatch up a repeat or two before committing oneself to a full project in any given stitch pattern.

Oh. What did I end up using on my doodle scarf? More on that another day.

*Extreme Knitting – A mythical book I long for instead of what’s on the shelves now. A compendium of highly challenging patterns in lace, colorwork, garment shaping and tailoring, tiny gauges, historical recreation/redaction – whatever, so long as each project is as magnificent and as timeless to wear as it was an inspiration and learning experience to knit. I hereby reserve this title, but will surrender it to any author who can prove his/her work meets these conditions.