I feel like I’ve landed on the planet of the domestic divas. Everything I did this weekend involved knitting, sewing or cooking.

It’s shown here on a random stuffed toy – no infants of appropriate size being to hand at the moment.

The CVH is quick knit, although getting the legs on and finished were both a bit fiddly. Luckily I had some stuffing left over from a previous project because I violated Knitting Rule #4, and didn’t bother to read the whole thing through before I sat down to attempt it.

My only other caution is a minor one – If anyone is going to knit up your own CVH, be advised that on the diagram of how to pick up the stitches that form the leg, there is one 90-degree corner, and three slightly rounded ones. That 90-degree corner indicates the direction that the feetie part of the drumstick will point. I didn’t make the mistake of making the two feeties go in different directions, but I can see that doing so might be a very easy and natural error. (Why do I call them feeties? Because that’s what we’d call the real thing when as kids we’d haunt the kitchen when my grandmother made chicken soup. Only the best behaved kids got feeties from the stock pot as a pre-dinner special treat.)

My camo valences are also coming along. Everything is proceeding as per the plan and diagram in the last entry. Here’s Valence #1, all ironed out and pinned prior to stitching. 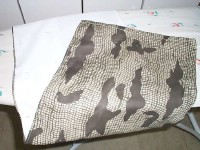 And I also managed today to do my community service obligation. I baked for the Election Day bake sale, to be held at (and benefit) Younger Daughter’s elementary school. Class for both kids is canceled on Tuesday. Usually voting happens with no interruption of school. My guess is that they’re anticipating record turn-out. That means lots of people hungry to express their political will, who might also be hungry for cinnamon hazelnut teacake, or cocoa spritz cookies.

On the teacakes, I used a mini loaf pan that produces four small cakes, sort of like this one. 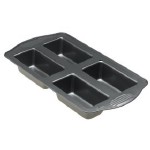 One recipe of the batter (plus about a half cup of ground hazelnuts in the batter and another half cup in the topping) worked perfectly in it although I did end end up baking the cakes for about 10 minutes longer than the recipe advocates. All four cakes turned out quite nicely.

The cookies also were a success, with one iteration of the recipe making approximately 115 1.5-inch cocoa stars. However I find that most published cookie press cookie recipes are way too stiff for my presses and this one was no exception. I want my batter to be something like refrigerated peanut butter in consistency. It should be so soft that it must be shoveled into the tube – not something that can be taken up and rolled into neat cylinders and inserted. I used an extra tablespoon of cocoa in the spritz cookies, plus considerably more milk than it calls for to achieve my target texture. I used sour whole milk in both the teacakes and the cookies, having some in the fridge this week. It worked nicely, providing both with a tiny bit tangier taste than usual.