There’s always something a bit bittersweet about the end of a holiday or festival.  All that preparation before, then the exuberance of celebration, followed by an ending.  And then all that’s left is clean-up, thinking on the past, planning for the future, and looking over the pictures.

Yesterday was the end of the 10-day annual celebration in honor of Lord Ganesh.  We didn’t get to see the very heart of the festival in Pune – that was accessible only by wading on foot through blocks and blocks of dense crowds in the old parts of the city at night, something inadvisable for Western women on their own.  But thanks to the resourcefulness of Driver Rupesh, we did get to catch some of the sights and excitement around the edges.

First, there are over a thousand sanctioned celebratory platforms (pandals) raised by various affinity groups – civic associations, merchant groups, political parties, charitable organizations, religious affiliates and so on.  And there are easily as many “unofficial” pandals, not registered, erected by still other smaller groups; in addition to an uncountable number of displays and altars in private homes.

Rupesh drove us around the edges of the area cordoned off for pedestrian traffic only.  We saw only a very small portion of the pandals, but even so, we lost count at around 50.  The only thing these displays have in common is that there is a revered image of Lord Ganesh at the center, as the focal point for devotion and offerings.  The housings differ in size, elaborateness, decoration, and other activities.  Some include stages for live performances, and in between devotions show live action tableaux, plays, musical performances, puppet shows, or other in-person entertainments.  Others include audio-animatronic spectacles, illustrating scenes from sacred texts, classical literature, or history.  Some are total light shows, with throbbing music and choreographed  displays of thousands of LEDs blinking in time to the beat.  Still others include video loops or public speakers espousing various noble causes – respect for women, clean water, universal education, and the like.

Some, belonging to smaller, less affluent organizations, pass up the expensive lights and fireworks.  Those are decorated with flowers and plaited banana leaves, paper ornaments, or modest household textiles. The most poignant were totally bare, with signs that said that the money the group would otherwise have used for decoration this year has been donated to flood relief in Uttarakhand, the province in which thousands of pilgrims and hundreds of villages were swept away during the June monsoon rains.

Here are a few photos of what we saw.  Apologies on the image quality.  Taking photos at night from a moving car in the rain requires a better camera and a steadier hand than we possess.

The architectural fantasy on the left had a large stage with dance performances.  The LED creation on the right twirled and throbbed like a Las Vegas sign. 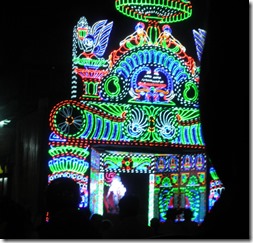 Here’s a GIF made up of images we took, that conveys a (silent) impression of the frenetic dancing lights at yet another pandal. But you’re missing out on the disco-beat drums of the accompanying sound track. 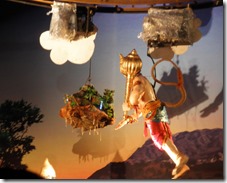 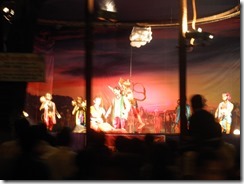 The animatronic display at the site above is of a pivotal scene from the Ramayana.  In this story, Lakshmana, the son of Lord Rama has been gravely wounded during the wars against Ravana, king of demons.  The only thing that can heal him is a herb that grows on a certain mountain in the Himalayas.  Lord Hanuman, comrade of Lakshmana undertakes the quest.  Prevailing against a hindering Ravana, the hero Hanuman arrives at the mountain, but even after stretching time for his search by delaying the sunrise, he cannot identify exactly which of its plants the healing herb might be.  He solves the dilemma by fetching back the entire mountain (image at left).  Lakshmana is saved (image at right), and Hanuman is extoled as a sworn brother of Lord Rama.

Pandals are the centers of celebration for ten days and nights, with most of the activity occurring after dark. On the last day, the images and devotional offerings are honorably retired by immersion, preferably in a flowing body of water.  This is accomplished via procession, with as much music, dancing, singing, and general merriment as possible.  Here you see a small family image being escorted down our street (seen from our balcony, above). What you can’t hear is the singing, chanting and cymbals that marked this progress:

The celebrants are stained with red because they launch red powder at the image as they make their way to the river, three blocks away from our flat.

It seems that on the last day, half of the city is in motion, conveying Ganpati to designated immersion spots.  Big ones travel in luxury, in massive lorries and carts decorated as elaborately as the pandals (below).  Smaller ones are pushed on hand carts (also decorated); or as above – carried by hand.  In all cases, the images are accompanied with chanting, drums or marching bands, singing, and dancing.

Most processions converge on one of the official staging areas, where the images are handed to special groups hired to perform the final ritual to sink them into the river, either from boats or (if size is a limiting factor) being carried by teams of bearers and swimmers (left).  Some families opt for non-official immersion spots, and even risking the rapids themselves (right). 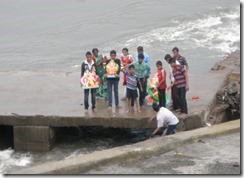 Now today, the day after, the city seems empty.  Pandals are still standing, but their sacred inhabitants are gone.  The structures are being slowly disassembled.  They have a slightly forlorn and empty air, as if all of the past ten days of celebration can still be heard echoing across the empty platforms, playing out before their absent Lord.