As you can see, progress on the first blackwork forehead cloth has been quite swift: 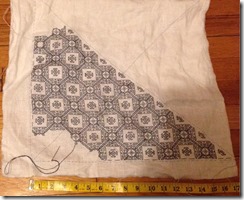 I have just two corners left.  Although I have been using my sit-upon tambour (round) frame for this project, I will now switch to a hand-held hoop.  That’s because it’s significantly smaller, and better able to get close to the edge of the cloth.

On thread consumption – I started out with a 100-yard skein of the hand-dyed filament silk.  What you see here is the entire thing.  Every inch.  Luckily, I have another and will use a bit of it to complete.

Here are some more answers to questions posted here and other places where I’ve shown this piece.

Pretty much the same as the front:

That’s because I’m primarily working this in double running stitch, which the assiduous can make entirely double sided.  I am not bothering (note the presence of Evil Knots) because this cloth will be lined.

How do you keep your knots from pulling through?

I never just make a knot, then push my needle up through the ground cloth, trusting entirely on the bulk of the knot to keep the stitch in place.  I either knot around a bit of established work, or if no previous stitch is handy, I make a knot at the end of my thread, stitch up, then down again leaving about an inch not pulled through to the front.  Then I use my needle to pierce the working thread.  I gently pull the thread into place, snicking up that inch of extra, and manipulating the just-made noose-join so that the knot isn’t in peril of being pulled forward.  Yes, I could make a waste knot on the front, then trim the thread back in a more traditional method, but in this case at least, the thread is prone to shedding color, and I prefer not to make a mark “outside the lines.”

On the terminal knots, I run the thread under an established stitch and do what amounts to a double hitch knot, then use my needle to pierce the newly made knot, pulling the thread tight.  This acts as a second lock and prevents unraveling or pop-through.

How do you determine your double-running baseline in a complex design like this?

I know I’ve written extensively about finding the baseline, but in this case, there isn’t just one stitching logic.  There are many, and they are all situational.  Do I want to go “out and back again” so that the active end of my line of stitching ends up near the point of origin?  Do I want to just head out in one direction until I run out of thread, then follow up with a second strand, filling in my every-other-stitch?  Do I want to establish the location of a design element, then go back and fill in detail later; or do I want to do every detour and departure on the first pass, leaving only a minimal amount of work for the second pass?  How much thread is left in my working strand?  Lots?  Just a little?  All of these thoughts combine and influence my path planning.  I can say that the stitching logic in no two of these repeats was identical – it was all done to optimize the remaining thread, cover the design without omissions, and to make counting and alignment as easy as possible; and the mix of those factors at any one time varied wildly.

However there is one thing that ended up being of great help in keeping everything properly lined up and accurately on-count. When I have a T-intersection, on the first pass I include the “attachment stitch,” so that when I come back and link up to that segment, the exact spot is easy to find.  Otherwise, if I continued straight along the top of the T, when I came back later and had to add the vertical, it would be harder to know if my alignment was correct; if the new addition had synched up correctly to the prior work. 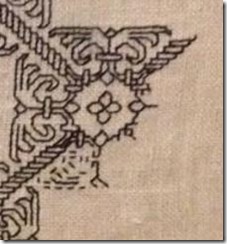 You can see this in several places on the snippet above.  Look at the heavy stacked diagonal at 1:00. On its base, where it joins the circular plume-flower medallion, I’ve left a little vertical hanging off the foundation 1×3 rectangle.  That’s an attachment point.  As I near it on my next stitching pass, I can cue off it to proof my work as I go, and know that I am on target for an absolutely aligned attachment point.  That’s also why I have those little barbs sticking out on the base of the as-yet-to-be-stitched diagonal at 5:00.

What are you going to do with the rest of the cloth?

It would be a shame to cut out my completed triangle, leaving a difficult to handle remnant.  So I am going to stitch a second, smaller triangle opposite this one, leaving cutting room between them. After I’ve finished #2, I’ll assemble both forehead cloths.  Not sure what motif to use on the second one, but likely it will be less dense, because I have less thread.

What are you using for the ground?  Do you like it?

I’ve had this piece of MCG Textiles even weave in my stash for at least a year, maybe two.  It was the last bit of 32-count linen ground on the shelf at a local JoAnn’s big-box crafts store.  I do not recommend it.

I have to say that I’m spoiled by higher quality linens at this point.  I am finding too many irregularities – thick/thin threads, slubs, surface matting, and the like, that are affecting the look of the finished project.  There’s one area in particular that drove me crazy – a segment of a few inches in which every other thread was super narrow.  Countwork there was not fun at all.  In addition, it’s not really an even weave.  There’s a distortion if you compare north-south to east-west.  (I can’t tell which is warp and which is woof because the bagged segment had no selvedge on it).  I grabbed it off the top of the stash when I started this because it was a nice coarse count, the size of the piece was suitable (minimal waste), and I wanted to begin quickly, without ordering or hunting for materials.