Based on private notes of inquiry and discussions on various historical needlework-related boards and forums of late, I see that people are still confused about the working logic of linear stitching.  In specific, how to determine if a design can be worked entirely two-sided.

First off – the two most popular historical methods for working thin linear designs are double running stitch and back stitch.  The big difference between the two is the appearance of the reverse.   Done meticulously, with care paid to invisibly terminating threads, double running stitch is almost indistinguishable front and back.  Almost because a few people do produce a slight difference due to differential thread tension on each of the two passes required to produce a unbroken line, but that difference mostly settles out over time.  Back stitch on the other hand produces a public side very much like double running, but the reverse of the work is heaver, and depending on the stitcher can look like outline or stem stitch, or even like a split or chain stitch if the needle pierces the previous stitch as a new one is made.  Of necessity in back stitch there is twice as much thread on the back of the work as there is on the front.

Double running stitch takes two passes to accomplish because it first lays down a dashed line, with the spaces between the dashes being filled in on the second pass.  A back stitch line is completed in one pass, with no need to revisit areas previously stitched to complete the line.

Many people prefer back stitch because there IS no going back.  They like the certainty of knowing exactly where they are at all times, over the pretzel logic of calculating how not to be caught in a cul de sac while retracing steps in double running.  Personally, I prefer double running, and follow double running logic even if the piece I am working will not be seen on both sides.  I find that path planning to be fun, and I appreciate thread economy, especially when working with more costly or difficult to source hand-dyed silks.

But for some one challenge of double running is knowing which designs can be worked in that stitch such that both sides can be made totally identical.

It’s easy.  Any design that has no “floating elements” is a prime candidate.  If true double sided is a total goal (including invisible termination of thread ends), any piece that has a floating element large enough to allow that burial is also a possibility.  It doesn’t matter how complex a design is, so long as elements are all branches and detours off of one or more main baselines, they can be stitched double sided.  And yes – there CAN be more than one baseline in a design.  More on baseline identification is here.  The logic of following detours and returning to the baseline is here.  How to break up a large design into several smaller baselines is here.

That’s easy.  They are any ornament or detail that is discontinuous from the main line of the design.

Here are several that I’ve done in double running, based on one or more continuous baselines, with no floating element deviations.  In these designs every part of every work is attached to every other part, at one or more points.

The last one has additional embellishment in long-armed cross stitch, and the final one includes two edge borders, each done as their own “line” separate from the main motif.

By contrast, here are several that have those “floating elements” called out. 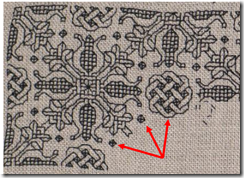 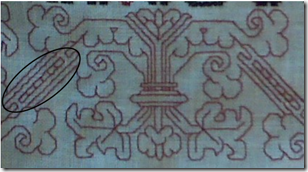 The knot element in the all-over at left is not attached to the main pomegranate frame.  It is however just large enough manage thread-end-hiding.  So while its presence makes this a tedious and difficult pattern for double-sided double running stitch, it is not a deal breaker.  However those little accent diamonds are deal breakers.  Too small to hide the ends, and detached from the main design.   The ladder element in the arms of the repeat at right is broken from the main design, and is too small for end-camouflage.

There are often short lines or sneaky little floating accents hidden in both simple and more complex repeats.  Strawberry pips are notorious for this, although I haven’t any stitched examples to hand:

My dragonbeast, however lovely, has quite a few floating elements, making him a problematic choice for a fully double-sided work. (Eyes and faces are almost always difficult). 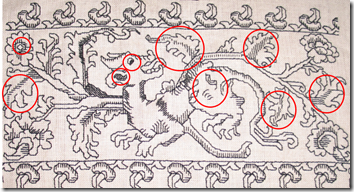 And this bit, stitched from a Lipperheide book, is the absolute poster child for discontinuity.  I didn’t mark them all, but you get the idea.  The spaniel and possibly that center bundle thing are the only bits large enough in which to bury the ends, if a fully two-sided result is desired.

Here’s a tricky one.  Look closely at the bit on the left. 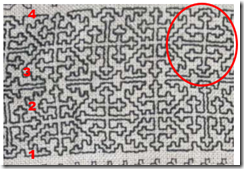 It looks continuous, but it’s not.  There are in fact FOUR separate double-running baselines, AND a discontinuous element in the motif.  He’s in the red circle on the right.  Like the round knot in the first example this might be done double sided, provided that the stitcher was willing to terminate separate ends for that relatively large floating element.

So in short – it doesn’t matter how complex a design is, so long as all elements are continuous it CAN be stitched fully double sided, in double running stitch.