I was playing around with I-cord last night, in part because I’ve decided to re-think the Entrelac piece (I’m going to do the vertical strips thing, as an entire front of unbroken entrelac in my size boded to make me look like thebacksideof an enormouspoison arrow frog).

I’m sure I’m not the first one to do this, but given recent explorations on knitting edgings onto things, and to attaching I-cord to terminal stitch edges (like in the poncho); I wanted to see if I could do I-cord attached to a vertical edge. I fooled around a bit and came up with this sample: 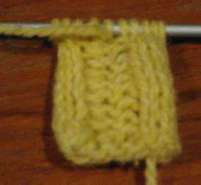 I apologize for the blurry pix. I had better luck knitting the sample than I did in photgraphing it.

This piece is ten stitches wide. It has I-cord at both the left and right edges, knit at the same time as the two-stitches of garter in the center. Here’s what I did:

Cast on 10
Row 1: K6, bring the yarn to the front without making a loop on the needle; slip 4 stitches purlwise
Repeat Row 1, making sure topull thefirst stitch especially tightly to create the I-cord effect

I could have done something similar to create a double I-cord strip for the poncho, had I started with 8 stitches, and done K4, slip 4.

As is at 10 stitches wide, this sort of strip might be useful for someone making belts or bag handles. It would work well fulled to make a wider bag handle than standard I-cord. I need to experiment more, but I think that if I started out with 12 stitches (4 for each edge, plus 4 for the center), I might be able to do some order swapping to make a braided cable.

But there’s no reason to stop there. I happen to detest the loose, flabby edges on most simple scarves and blankets. The next time I knit a scarf or blanket, I’m going to figure in four stitches on each side. I’ll begin each row with four knits, and slip the last four stitches purlwise. I’ll need to experiment more to see if this sort of thing tames Dreaded Stockinette Curl (I rather doubt it), but I think it would be a nifty edge treatment none the less.