OOP BOOK REVIEW – THIS IS KNITTING

Still unplying. Nothing much to report that’s interesting on that front, so I turn to an old stand-by. Yet another review of A Knitting Book that Time ForgotTM.

This one is This is Knitting by Ethel Evans. It was published inNew York by Macmillan, and bears a copyright date of 1948. Here’s a typical page. 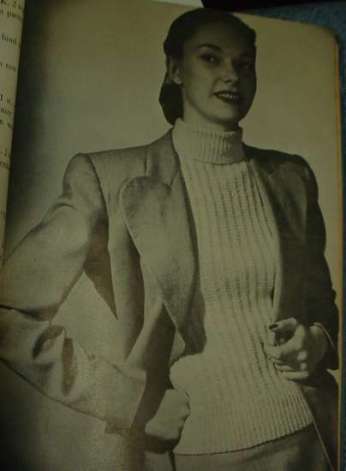 Evans book is clearly different from the Teenage Knitting book I wrote about earlier this week. For starters, it’s aimed at a general knitting audience, not one that’s mostly high school and college aged. It’s divided more or less in half. The first half presents about 40 knitting patterns for women, plus 20 each for babies, and men. The second half of the book is a stitch dictionary, giving photos and directions for about 80 or so knitting standards, including knit/purl textures, simple cables, basic lace stitches, and even some tweedy linen stitchstyle colorwork. There are no stitches in this collection that aren’t also in either Walker ‘s First or Second Treasury.

Directions are entirely in prose and like the other book, avoid confusing shorthand but are incomplete by modern standards. Finishing directions are rudimentary at best "Press pieces, sew up." Shaping isn’t dealt with well. Some photos of the adult garmentsclearly show more shaping than the pattern pieces as written will yield (perhaps judicious tailoring was done during sewing up, but that isn’t mentioned). Buttonhole placement isn’t described at all, although directions for buttonholes follow some patterns. I-cord trim used on some adult jackets is only hinted at, although it is clearly shown on the photos.

Some other odd things stand out about this book. First, there are no patterns for kids garments between about two years of age and late adolescence (when they can wear grown-up stuff). Second, the rudimentary how-to section is illustrated by flat photos of knitting on knitting needles – no hands holding them or in-process shots. It’s tough to see what is supposed to be happening in those photos. My guess is that the how to section is just preaching to the choir. I don’t think the author ever intended for anyone to actually learn knitting from this book. Maybe to use it as a refresher to remember skills learned long ago, but certainly not as a prime source of knowledge.

That being said, patterns here are more of the classics. Simple cardigans, pullovers, jackets and vests, almost all with shoulder pads. There are a couple of patterns written at worsted gauge (5spi); but most hover around 8spi. Mens patterns are restricted to very conservative vests. Even so, if you like fine gauge retro classic, you’ll find several wide-ribbed, body hugging women’s (and men’s) pieces that might pique your interest.

The two more valuable sections of the book are the baby patterns and the accessory patterns. All of the baby knits are very simple, classic shapes that are wonderfully wearable today.There are several layette sets withmatching hats, sweaters, booties and mittens abound. There is a surplice sweater plus several baby blankets that are particularly nice – the blankets being mostly the center panel in a texture stitch/wide garter or seed stitch border type. All of the baby things are very simple in design, but again like the adult patterns, the write-upsaren’t as detailed as new knitters might like. Still, shapesand techniques arebasic enough for an adventurous newbie to use this book, provided he or she is of the plunge-on-through mindset. Sadly the copy I borrowed had several pages torn from the center of the baby pattern section, including the instructions for both the sweater and blanket I liked best. (Death to the mutilators of library books!)

Accessories can be found throughout the thing. There’s a triangular head scarf that my daughter tells me would pass muster in her high school today. Gloves, socks and mittens are here, too. The glove patterns look especially nice. There’s one pair with triplecabled back I especially like. One shortcoming – the argyle sockpattern in this book is severely simplified, and doesn’t sport those nifty cross-hatchings that distinguish a true argyle from a plain olddiamond pattern – probably because NO charts are used anywhere in the directions and the write-up on where to put all those single-stitch wide lines (or to position them using duplicate stitch) would have driven the copy editor mad.

Like most of these older books anyone trying to duplicate patterns will probably run into yarn substitution problems. Looking at the list of yarns used in the book, my starting (and unswatched)swappingsuggestions would be:

To sum up – not asuseful nor as easy to follow as the Teenage Knitting Book. This is Knitting has some items of note, especially in the baby section and for glove knitters, but other than those, the book is interesting more as a historical document than as a still-living instruction book.

Side question: Do people find these reviews interesting or useful? Does anyone else care about old books found in musty library stacks, or about knitting’s recent history?