I promised a post-tasting report. Yesterday I spread melted bittersweet chocolate over the tops of my two cakes, dusted them with cocoa, and stuck some left-over almonds on top as a decoration. Did I mention that for the past week, I’ve been drizzling rum over one of them – a little bit each day? No? The secret’s out now.

This is an adult chocolate dessert. It’s not soft, gooey, and sweet. To be truthful, it’s hard and chewy from all the fruit and nuts. The taste however is out of this world. It’s spicy, more bitter than sweet, yet with just enough sweetness from the fruit to round out the flavor. The faint hint of rum was a good addition, and seemed to bring out more of the toasty notes from the nuts. We served our cakes with a selection of white wines. It would also be great with hot coffee or tea.

This one is a make-again keeper, but unless you’ve got a huge crowd coming or want to freeze or give away cake #2, I’d suggest halving the recipe. I’d also suggest sticking with the hazelnuts and almonds. You can use any dried fruit you wish (I used prunes, dried cherries and apricots because I don’t like citron and figs were too expensive), but I think that substituting walnuts or pecans would overwhelm the cocoa’s flavor and change the character of the cake. 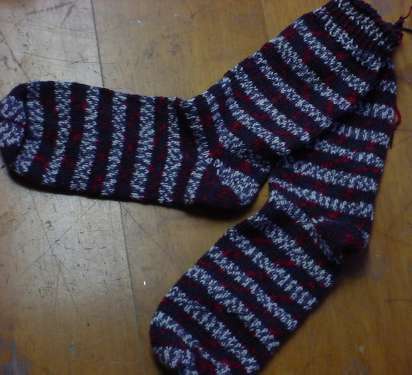 I knit these Saturday night from Lion Brand Magic Socks, while watching Present #1 below. These socks are worked at 7spi/10rpi on 2.5 mm needles (in between a US #2 and #3). The yarn is serviceable enough – a standard wool/nylon blend sport weight as opposed to fingering weight sock yarn. The color patterning is pretty uninspired compared to most. I get two speckled fake “Fair Isle” sections in this repeat, one in gray and white, the other in red and black. The entire repeat cycles in about 1 inch. Not terribly exciting, but at $7.00 US per 100g ball (enough to make up to about a man’s US size 11 shoe) – a very good value.

This pair is for a new neighbor who showed me how our 100-year old hot water heating system works, and helped me figure out the Rube Goldberg device that’s our boiler: 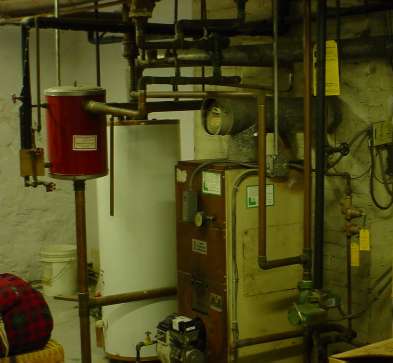 The Resident Male and I buy gifts for the two of us together, but don’t wrap them or bother to save them for holiday debut. This year’s presents were the extended DVD edition of Return of the King (better than the theatrical version, but unsatisfying if you yearn for much of the books lesser themes and characters); the long awaited Lurulu by Jack Vance; and the Vance Integral Edition. The latter most was a major splurge that will count on the present roster for years to come.

Vance is writer whose works are easy to satirize because of his unique style, and who is dismissed all to lightly for it. At the same time, he has a devoted following of readers who appreciate them for what’s deeper underneath. His following in is bigger the UK and Europe than in the US.Vance appears to be especially popular in the Netherlands, Germany, and France – all in translation. That surprises me as so much of the texture of his prose is in his precisely worded detail and structured phrasing – things I wouldn’t think would move well from English to other languages. Even his old fashioned space opera style stories have a depth of character and sardonic insight into the ironies of human nature that push them beyond the genre.

If you’ve never read anything whatsoever by Vance, I’d suggest you start with the widely collected short story “The Moon Moth.” You can find a list of books containing “The Moon Moth” on this page. If you can’t find a copy, you can listen to a dramatization here. After that, pick up anything. His better known works include The Dragon Masters, the Demon Princes series, the Planet of Adventure series, Lyonesse and its sequels; the Alastor cycle; and the Dying Earth books. I’d start with his earlier, shorter works. They’re each masterpieces of tightly crafted plot construction, and fit an amazing amount highly evocative storytelling into some truly slim volumes. Enjoy!