As you can see in today’s progress photo, I’ve finished fusing the hem. I’m quite pleased with the result. You can also see that my bottom edge is in fact scalloped, and that the scallops stand up nicely without cupping or curling, and that the hem facing accommodated their shape without any special adjustments.

I’m now up to Row #4 – the row on which one is supposed to begin the kangaroo style pocket. I have to admit that I’m going to depart from the pattern and cheat a little here. I know the pattern calls for working just the pocket front, then going back and picking up stitches at its base to provide the foundation for the back side of the pocket. After both are worked to the same depth, the pocket front and back are fused, and the knitter continues on to work the rest of the body.

A while back I did several Wonderful Wallaby sweaters for assorted nieces and nephews. It’s a raglan pullover that also has a kangaroo pocket in front. Those directions called for something similar – knitting a bunch, then picking up stitches and knitting a second layer (in that case for the pocket front) then fusing the two layers together. I found the picking up to be tedious at best, so I came up with an alternative lazy person’s method.

On the row where the second layer is introduced, I knit with two strands of yarn. Then I take two needles and stitch by stitch carefully slip one loop of each stitch to the needle I will use for my pocket front, and the other loop onto one from which I will end up transferring the stitches back to my original body needle (on small things, I just use the other end of the body circ for this, then shunt the stitches back to the correct "ready to knit" orientation). The yellow arrow indicates the circ that’s carrying just the pocket front stitches. The pink arrow shows the circ that’s carrying the full body. 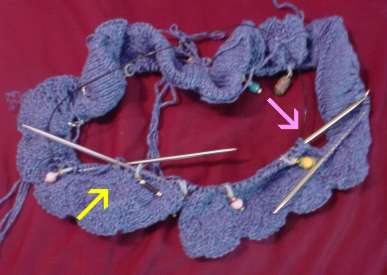 In this case, because of the split cardigan front, I’ve had to start two more yarn balls – one for each half of the pocket. Again, in order to accommodate the zipper tape, I didn’t work the two stitch thing all the way to the cardigan opening edge. Instead I cast on four "free" stitches left and right for the inside the pocket piece, leaving the outside presentation side smooth and uninterrupted. I am now ready to do the sloped side pocket itself, on this confusingly presented second circ, now hanging off the front of my work.

As for where I introduced the pocket – I fudged. My chosen stitch pattern has strong verticals. I’ve moved the pocket opening over a few stitches so that it lines up with one of those verticals. Since it looks like ten stitches are decreased away during production of the pocket, and my verticals are present every ten stitches, I think I’ll be able to be similarly congruent when I finally work up to the fusing row.

One last note – like the Wallaby, the pocket edge appears to be in garter stitch. Frankly I am not a big fan of garter, and I don’t think it will complement the already busy surface patterning of my mutant Rogue. I’m thinking of doing four stitches left and right in twisted stitch ribbing instead. I’ll play with that idea a bit and see if it works. If not – it’s rip-back time again, and I’ll revert to the original garter pocket edging.