The only problem with starting out the summer with one’s vacation is that while there’s lots for the kids to look forward to in July and August, to me it feels like summer is already over.

While we had great fun on our week away, the weather wasn’t ideal. I didn’t mind the wet and cold because I was at my favorite place on earth – the beach in North Truro on Cape Cod. This is sunset over Provincetown, as seen from the deck of our room on one of the nicer days. 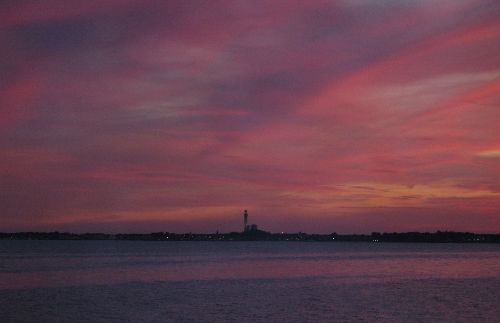 We had a couple of good beach days at the start of the week, then the weather turned cold and nasty. Luckily we were there with friends, and between good companionship and copiously applied wine, were able to keep both warm and entertained.

I did get in some knitting, but progress was slow. I was re-creating my North Truro counterpane pattern – invented in the very same spot – from my sketchy notes. I got off to a couple of false starts, regraphed some probelm areas, made some of the lines of the piece crisper, and played with various methods of joniing that avoid some need for seaming. Here’s the result:

As you can see, I’m mid-motif. The initial unit is the hex in the center. I knit that starting on some 3mm DPNs, moving to a circ as it got larger. Instead of binding off, I purled my final row, and left the thing on the circ. Then I attached my yarn at what looked to be a good corner point, and holding the thing with the reverse side front, knit one side’s worth of stitches. That produced the appearance of two rounds of purl on the front at the base of my soon-to-be-knit side square. I then worked the side square out using two DPNs. I worked my side squares attached like this, one at a time. After I got a couple done, I knit a side triangle separately (it’s worked base to tip) and sewed it into place.

I also experimented with skewing the attachment of the square unit. Since it really doesn’t matter where on the center hex the sides begin and end, I knit one square on katywumpus – aligning its center to the point of the star instead of to the center of the leaf motif in between the star arms. You can see it above. It’s the lone square that I’ve pointed out with the arrow. I’ve decided I like the original orientation better and left it intact just long enough to photograph.

Well and good. Things look like they’re working out. I’ve avoided working all those squares separately and the seams joining them to the hex in the center. My bargain basement Webs-find yarn is working out well, with a very soft slubby cotton hand. I like it a lot. Compare it to my first iteration of this idea:

I don’t know if you can see it, but the older yarn is MUCH heavier. It’s a very dense cotton worsted – almost a twine. The newer yarn is a 90% cotton, 10% acrylic blend, and is somewhere between DK and sport in thickness, plus it’s much less densely structured than the older stuff. The lighter yarn drapes better, plus it shows off the motifs better. All in all, things look quite promising!