TOE UP SOCK, PAST THE HEEL

First, an aside.  I finally darned in the ends of my Alcazar shawl.  I only end off ends when the final disposition of a piece has been decided.  In this case it means I’ve decided that as much as I love my Alcazar, there’s someone who deserves it more.  My shawl has now found its way to its new (and very appreciative) owner, and I beam with my own pleasure at  joy with which it was received..

My socks continue.  I’ve finished the first and am only a single evening away from finishing the second.  I’ve placed the motif on the ankle.  Because I chose to work it as a knit image on a purl ground, and the motif is made up of solid blocks and strips, unstretched the sock looks rather strange.  The motif draws in like ribbing and the purl background puffs out compared to the rest of the stockinette sock.  But when worn, it looks fine.  The purl ground recedes, the proportions of the knit motif correct, and the draw-in so evident in the unstretched item goes away. 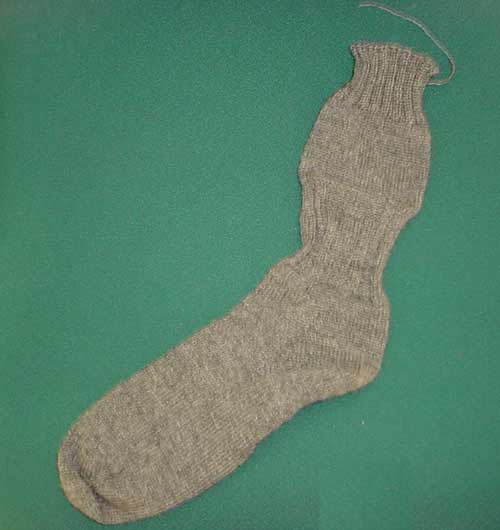 The motif on the ankle isn’t very visible in this photo, so here is the graph: 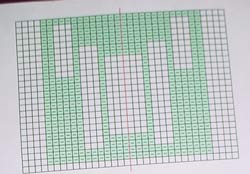 Yes, it has a specific meaning.  A work-related meaning that a very small minority of the viewers here will recognize.  And no – I didn’t stick to the graph in the absolute.  My final version has the same height to width ratios as this visual, but because there is very little variation row to row, I repeated the center area rows and the upper end rows more times than they are shown here. I did that because my graph was done on square units, but my knit stitches are not 1:1 ratio.   I needed extra rows to achieve these proportions.

In terms of placement, I centered the unit on the ankle bone, and repeated it on both sides of the sock.  The red line marks the centermost point and the whole graph represents half the sock’s stitches.  Because I work with four DPNs in the work and one in hand with an equal number of stitches on each of the four DPNs, finding that center point was very easy.  I do admit that once I began the pattern panels I rearranged the stitches so that I held the motif and field stitches (the green ones) on a single DPN, eight stockinette stitches on a second, the other side’s motif on a third, and the final eight stitches on the fourth DPN.  I did the reassortment to avoid the possiblity of a loose stitch marring the center of the motif.  While I don’t have ladder-itis between DPNs in stockinette, I am less sure of myself in reverse stockinette, so I avoided the issue entirely.   I planned my vertical placement so that the motif would occupy the center third of the sock measured from the bottom of the foot to the bottom of the ribbing.  That means I worked a few rows after completing the heel and before starting the motif, and working my post-motif stockinette to the same depth as the patterned part.

Finally, I finished the sock off with plain old 2×2 ribbing, whick I did until I ran out of yarn in my standard issue Regia 4-ply 50g/210 meter ball.  I’d say the resulting sock should fit from man’s shoe size 9.5 wide through 11 (possibly 12) medium width or so. With luck the target recipient has feet in that size range.  If not, I’ve got an alternative recipient planned, and I’ll knit another smaller pair for target #1.