A RAINBOW OF PROGRESS

Once again life overtakes blogging.  But this time it didn’t intrude so completely that all knitting ceased.  As a result I can report on progress and make some promises.

First, progress on my Trekking XL socks.  With the exception of binding off, they’re done.

Yes, both of the socks are the same size.  There’s a slight distortion because the photo was taken on a futon sofa with a canted seat area, then flipped 90 degrees.  The sock on the left was further from the camera, and just looks smaller.  As you can see though, just as I predicted, the tweedy type of striping is wildly unpredictable.  Both were knit toe-up from the same ball of yarn.  The sock on the left was done first.  You can see the color match between the cuff cast-off row and the toe of the sock on the right.  I did have a small quantity of yarn left over.  Probably enough to have been more generous in my K2P2 rib (it’s only 20 rows deep).

Before anyone asks – there is no way to make a pair of identical socks knit from tweeds made up of several plies that cycle independently through a set of colors.  If you’re dead set on identical rather than fraternal pairs, stick to printed yarns.  Like the one in the next photo: 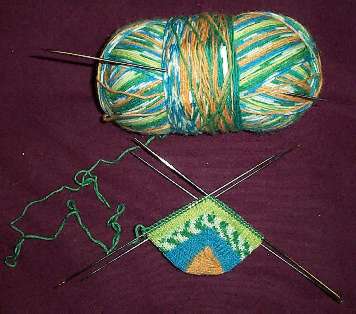 Lydia asks how I avoid little holes at the points of my short-rowed heels, at the spot where the heel ends and all the formerly dormant stitches have been re-activated, and the first post-heel full round starts.  She also wants to know if I put my non-heel stitches on a holder when the heel itself is being worked.

I don’t bother off-loading my non-heel stitches.  I just leave them on the two DPNs on which they ride for the entire sock and let them dangle.  I never have a problem losing them off the ends (I prefer relatively long DPNs for other reasons, but not losing stitches off the end is another good reason not to switch to shrimpy needles.)  On the gusset top hole problem – I pick up a stitch on each side during that first post-heel round.  There’s a little trick to it, so I promise to take pix of that point when I get up to it on this pair.

I’m finding that the repeat becomes less and less stable the further I get into the piece, even though my stitch count remains the same.  Better pix soon, I promise that too.

Posted in: Camo Flash Tee, Other