WHY (ALMOST) NO KNITTING GOT DONE LAST NIGHT

Smaller Daughter and I had fun last night building her robot pumpkin. She’s named it “Seven of Patch”. Today it heads off to assimilate the third grade pumpkin parade. 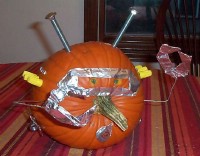 It was also a sewing night. The same daughter has her heart set on being a pirate this year. Most of that costume can be scrounged up from things around the house. But she needed a puffy white pirate shirt, and it had to be done before Friday (more on that below). So I hauled out my ancient 1962-vintage Elna SU (bought used) and clanked away. Even so a small bit of knitting did get done after I was finished wrestling the jamming bobbin case into submission. I managed to do another five inches or so of edging on the Wave scarf. I’ve got about a foot more to go and then I have the joy of fixing that nasty skip and run waaay back at the beginning.

Not tonight however. My kid-friendly workplace has invited employees children in after school tomorrow for in-office trick-or-treat. Employees are encouraged to dress up. I have tonight to figure out something that’s either easy to put on quickly or is not so distracting as to negate any possibility of actual work getting done before the kids arrive.