Yesterday I mentioned that I was working up two new projects. The second is still on the drawing board. While The Resident Male likes his crazed llama herder hat, he’s mentioned that it can be itchy, especially when wet. It’s also a bit tight on him. He’d like another that’s slightly larger, knit from softer wool than the first, but he still really likes the style and shape.

So I was thinking about what I could put on a hat for him, and what colors of sport and fingering I had on hand. I’ve got some small quantity leftovers from the rainbow scarf set. Not much, but enough for accents. Plus I really like the Camelia sport I’ve been using, which is about the same gauge but at my LYS is only available in very staid colors. So I began thinking about what would be mostly background with flashes of bright colors, yet would be guy-wearable. Then I saw the latest issue of Knitty. If someone can put Space Invader graphics on a sock, why not highly colorful Galaga spaceships on a hat?

For those of you born during or after Bush-the-Elder’s administration, Galaga was a very popular coin operated console video game of the Galaxian type – vintage 1981. You can play it here. It has been brought out for X-Box and some hand-helds (even phones!) but it’s not the same. It was also one of The Resident Male’s absolute favorites. (I preferred Tempest, but those vector based graphics wouldn’t chart up well for repro in knitting.)

So I set about graphing out the Galaga galaxy of sprites from screen shots preserved hither and yon. There are three enemies, each shown in two animation phases. One of the enemies repeats in a different color scheme. There’s also a separate sprite for the player’s ship, and a toggle that shows how many more player lives are available. Here’s one of the lower level enemies: 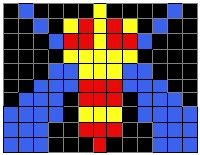 I’m not quite sure how I’ll fit these onto the hat, but I note that in my original, I buried all the decreases in the plain rounds in between the step-type pattern repeats. I had 10 decrease points per decrease round, and that the pattern repeats themselves were based on 10 stitch x 10 row units. Each decrease zone between bandings removed one entire repeat. That’s why I was able to repeat the pattern seamlessly as the hat narrowed.

I changed the rate of decrease as I moved along, narrowing the hat more steeply in the upper area not by increasing the number of decrease points, but by shortening the interval between them. You can see that the lower courses of the design are three pattern units tall, but the uppermost ones are only one unit tall. After that last unit was completed I didn’t have room to continue full design iterations, so I ended off with a solid color top.

My Galaga sprites are nine, thirteen and fifteen units wide, without background framing left and right. So I’m still on the drawing board for this one. Plus I can’t actually begin knitting until I finish my second Klein Bottle hat. Still, I’m armed and ready to begin.