I clearly haven’t gotten the latest sock bug out of my system. After playing with the yarn-leftovers entrelac pair last week, I thought that the same technique might be useful for a problematic skein. I recently bought a couple of 100g balls of Berroco Socks. The first was a visual jumble in the ball (color #1425 John Moores). The colors were pleasing, but the appearance of the thing gave no clue as to how it would knit up. It ended up working pretty conventionally, with an interest-maintaining long repeat:

I kept patterning on this pair to a minimum, and introduced the eyelets only because I find miles of stockinette to be exceedingly boring.

The other ball looked nifty in the skein, but presented more of a problem. Those nice, solid sections you see in the photo (color # 1487, Gielgud) are actually quite short. The foot of my toe up sock shows the small tiger-stripy effect of the stuff just knitted up plain in stockinette: 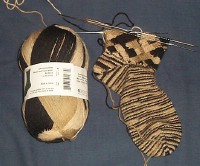 But that’s even more boring if continued up the whole leg. That’s where the entrelac comes in. I’m using it on the ankle part. The color patches don’t align into checkerboard (a mathematical impossibility) but they are interesting in a skewbald sort of way. Note that if I had used a companion contrasting color along with this brown/tan/ecru yarn I could have made the visual weave effect clearer.

I don’t know why I’m not more enthused about picking up an in-process project, but until I am I’ll stick to working up more of my stashed sock yarn. One thing that whets my interest somewhat is Hanne Falkenberg’s Mermaid jacket kit. Unfortunately it’s way out of my price range and doesn’t come in an XL (the large looks to be a 12-14 US). There’s a vaguely similar pattern available from DROPS/Garnstudio that is in my size, but the lines aren’t anywhere near as elegant and to me at least, it doesn’t have the drape or color placement finesse of the Falkenberg. So I keep dreaming…