I’ve finished knitting my bulky red baby blanket, and am up to the dreaded “darning in the ends” stage. Now I note that most of the criticism of the now discontinued Kool Wool was laid against its bulk and the number of ends inherent in any short yardage yarn of that weight. There are a lot of ends when you make something – especially a large something – out of a yarn that is only 60 yards per skien; and bulky yarn when darned in can look like large, creepy, and dreadfully obvious caterpillars crawling on the knitting’s surface.

While I can’t do anything about the sheer number of ends, I can make the darning in way less obvious. This fix works for any yarn that is made up of two or more constituent plies. It won’t work for a single.

Here you see my target end. Because this baby blanket will be seen from both sides, it really doesn’t have a front and back. Therefore for each end pair, I threaded one end to each side – at each new yarn ball join point one strand peeks out on the front, and the other peeks out on the back:

You can see my yarn is a thick, noodly cable style strand. Here I’ve separated the six plies into three two-ply bunches:

Why the color is so different in this shot, I haven’t a clue, but I have lousy camera skills. Still, if you squint you can make out that I’ve frayed the end into three sub-units. I then end off each of them individually, burying them in the surrounding stitches for about an inch, then doubling back, still buried to anchor them off; and finally clipping the ends close to the surface. 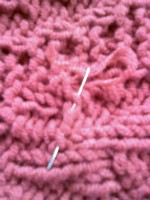 More bizarre color migration, but you can see the burial idea. And here’s the final result. Ends darned in near invisibly in spite of the yarn weight:

As for the true color of the piece, it’s “none of the above.” It’s more like this. Finished object pix tomorrow, I promise. Then it’s box and mail to the target baby, who by the time the package arrives, should be here too.