Through it all progress is being made. I do try to grab 10 minutes at lunch and another half hour in the evenings to decompress. Plus two weekends ago I had an actual half-day off on Saturday. My most recent strip is growing. I’ve got one more hops flower to go on the right hand edge, then it’s back to more lettering:

This is a strange strip to be sure. You can see the similarity between this and the plume flowers strip: 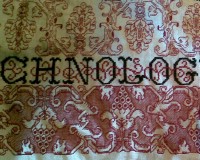 Both feature the same type of up/down symmetry, with a center vaguely vegetal motif separated by mirrored stem-like surrounds. Both use small parallel stitches on the inside edges of the motif as shading. Both combine flat decoration (the sprig at the center of this strip’s flower’s base, and a similar sprig in the same spot on the plumes), with more rounded, natural forms. And both sport a sort of baroque exuberance and total unconcern with true plant shapes. Not unsurprising since both of these were cribbed from the same source sampler.

It is interesting though to see how variants in working method change the look. The plumes were done in one strand of floss, the hops flowers outlines in two, with the background of the latter in one strand. Although detail in the two strips is roughly comparable, and if anything the plumes have MORE detail than the current strip, the plumes are lighter and airier. The current strip is by contrast, meaty looking. Those ocarina like turnip things on the stem divides are particularly fleshy, in a somewhat unsettling way.

I’m not sure what the strip after the next bit of lettering will be. I am considering a bastard mutation of two blackwork styles – perhaps working an outline for a very open and unadorned long repeat strip similar to this one:

But instead of working the background, working the foreground as if it were one of the freehand inhabited blackwork styles, similar to this: 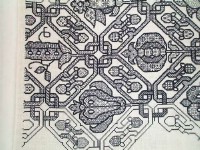 Not sure yet, but with no historical accuracy constraints on this piece, why not?