Another descent into deadline hell for me so posts here have been/will be sparse again.

I did manage to squeeze in a strawberry tart. Made entirely from our own home-grown strawberries.

Three years ago I got one plant from a neighbor, and put it along with some lirope in the sunny side garden near our giant grass. I know that strawberries spread by runners, and between the two low, green, spreading plants, I hoping for a nice ground cover in between the roses, heather and blueberry bushes, sort of a green mulch.

The first year the strawberry plant established itself. The second year it conducted a savage land war with the lirope, which is now pushed to the edges of the area. There were a couple of berries, but the squirrels got them long before we did.

This year there are strawberries everywhere. My ground cover hopes have come true. The plants are thick enough to suppress all but the most insistent weeds. In addition we’ve got berries! LOTS of berries! So far we’ve picked about four pints. Not much by commercial standards, but enough for a nice fat tart and several breakfasts. And they’re GOOD. My girl-next-door berries are a far cry from the centerfold-bimbo ones trucked into the local market. True, mine are no where near as huge nor as pretty, but they’re intense and firm with a flavor the watery supermarket berries can’t match.

Slow going too on the Clarke’s Law sampler. I’m still working on the current voided strip. Again, filling in the background with long armed cross stitch takes longer than just working double running outlines. That and time compression are slowing me down:

And for Karen in California, who wanted to see the whole thing so far: 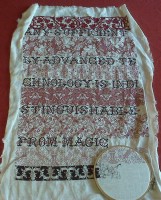 This is roughly 7 months of stitching, for between 30 and 90 minutes per day (my first post in this series was back on 7 December of last year).

Next will be a very wide strip, probably worked two tone using both the red and the black together. Slightly less dark than the narrow strip I’m working now, but denser than the motto bearing areas above it, to help anchor the bottom. I’ve got a couple of candidates but haven’t decided exactly which one to do. After that it’s probably between one and three strips to finish out the cloth, depending on width of the patterns chosen, filling in the area east of “Magic” with an author attribution in a smaller font (probably balanced with a narrow strip to take up any remaining space); and doing some end of line doodles to square out the ragged right in the other text strips. Then finishing and framing. Taa daah!

PS: Thanks to adnohr. Both the Ursa and XStitch Studio programs are on my list to review, once I return from the shadow of deadline doom.