Progress on several fronts here.  Slow, for sure – but progress. 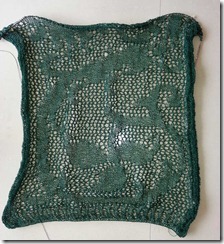 Both Long Time Needlework Pal Kathryn and I were convinced we’d seen this beastie before.

Sure enough, blessed by the local resource fairy, and well versed in Siebmacher’s oeuvre, Kathryn managed to dig up the original, from the 1603 edition of Siebmacher’s Shon Neues Modelbuch. I got in touch with MMarioKKnits himself to ask if he used the Siebmacher when he drew up his pattern, or if he remembered some other secondary source that was his inspiration. Many of these designs were re-collected in the mid 1800s, when counted work went through a major renaissance, some of which was inspired by actual Renaissance pattern books.  I suspected that one of these mid 1800s collections was the source in question.

MMario confirmed that he indeed started with a mid 1800s work, but he didn’t remember which one.  He pointed me at the Antique Pattern Library (more on this below). I’m pretty familiar with their inventory, but wasn’t able to find his secondary source either.

There are some differences between the MMario version and the one from 1603 – as one would expect in a multi-century game of garbled pattern transmission telephone – but the main motif, a hippocampus (not a dragon) is spot on count for count the same.  Why do I think it’s a hippocampus?  Because these designs were highly thematic, and a mermaid would be more likely to keep company with a mythical sea-steed than a dragon.

I’ve got official permission from MMario to post some quotes from his graph in order to put the changes in context.  The black squares are the same in his rendition and the 1603 Siebmacher version.  The red squares are from 1603, and are different from his design.  The majority of the beastie is the same in both.

This center panel – a dual tailed undine similar to the one used by Starbucks in its logo – can be used as a drop in, inserted right into the MMario piece to make a wider stole.

The other modification is in the tail.  MMario’s beast has an elongated tail swirl with a nifty trifoliate tail.  But in the original we see instead a smaller, tighter spiral sweep, a large quaternary flower, and the implication of a bridged mirroring putting two hippocampi tail to tail, centered around a second “bounce line.”  Please note that I’ve not included the whole dragon repeat in order to keep from stepping on MMario’s pattern toes.  You’ll have to visit his design to get the rest of it. 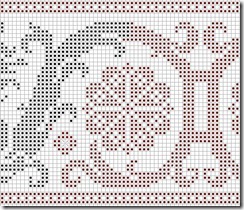 I’m going to attempt to introduce the center mermaid into my Dragon Stole.  Wish me luck!

Aside on Antique Pattern Library – this is a non-profit, volunteer effort to scan and preserve out of print documents and ephemera related to needle and domestic arts.  They have a huge collection of public domain embroidery, knitting, crochet, tatting, sewing and crafts books and leaflets dating from before 1920.  A large proportion are from 1860 through 1910 or so.  They even have a couple of early Modelbooks thrown in!  As a reference, its invaluable.  As an archive of women’s history, even more so.  I strongly urge everyone to visit, to sample some of the freely available resources there, and most important – to donate to sustain the collection.  It’s no secret that they live hand to mouth.  I’d truly love to see them do so a bit longer.