Quality ironwork,, armoring, weapons work, and smithery fascinate me.  Especially wrought, as opposed to cast iron.  I am also fond of arms and armor.  The precision, tracery, and especially the contrast between the hard medium and delicate forms speaks to me, with parallels to textiles and couturier design.  Oh and the elements of fire and danger.  Let’s not forget the purpose…

While there were many other famous textile examples on display at the Victoria & Albert Museum, The Tower of London, and the British Museum, most of my embroidery and stitching readers have already seen them.  They’re the examples presented in just about every textbook or reference work on stitching. Instead, I’d like to take a cross-craft side trip and look at some of the things we saw that are less well known or documented in the hope of kindling some cross-pollination.

Today is wrought iron.  The V&A has a magnificent hall of ironwork.  How could one not adore this dolphin, so much like a calligraphic image? 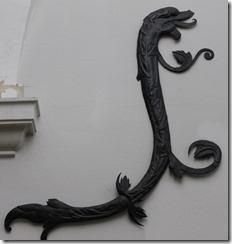 I also love this pair of window grilles: 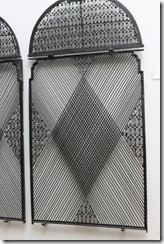 The thin bars that form the center diamonds are all independently forged to the frame and are formed and spaced with great precision.   The contrast of geometric and organic traceries in the side triangles and arch are blackwork in iron. This piece is V&A Number 125-c-1879, from Italy, dated 1575-1600.

I fell down on the job and didn’t get the annotation for this piece, and I can’t find it in the on-line photo collection to provide provenance and date, but it’s in the same gallery as the grille above. 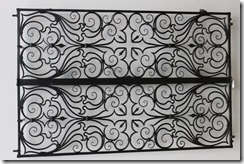 The play of curves and symmetry fights with my mental preconception of iron as unyielding and linear. 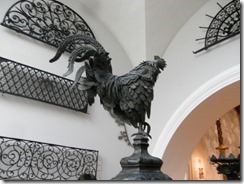 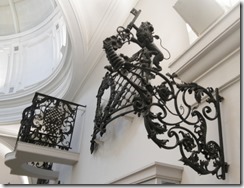 Now – why the side trip through metalwork?  Because I want to show that the aesthetics of historical embroidery are even better appreciated in context.  The forms of the late locksmith sign mimic those of Rococo laces and goldwork stitching.  The earlier grilles echo contrasts, shapes and lines of Italian and French strapwork embroidery, done at around the same time.

Finally, imagine the shadows thrown by those window grilles – sitting in the afternoon sun made lace as it sifts through the iron, stitching oh-so-similar shapes until it is too dark to see.