Stitching geeks – like those immersed in every esoteric discipline –  love to argue; even when an issue is settled.  Sometimes assertions bubble up again, are discussed with passion, and then go into remission.  Occasionally these debates cycle back, usually because reference materials with outdated opinions are found by a new generation of hobbyists who take the authors’ words at face value.

One of these oft raised/oft settled debates involves the use of plain old common cross stitch in historical eras: was or was it not done before 1600. And the answer isn’t crystal clear, nor does it come with hard boundary dates.  Let’s look at modern stitching and a dated example from the late 1500s.

Figural cross stitch isn’t new.  It isn’t modern.  But it has morphed into a recognizable modern style that has migrated from its pre-1600s cognates.  The photo below is of a contemporary sampler designed by Marilyn Leavitt-Imbloom, for Lavender and Lace.  It’s entitled “Angel of Dreams” and is widely available for purchase (a quick Google search will turn up retailers): 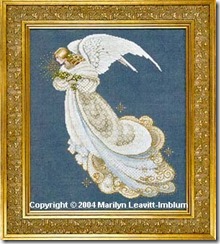 Ms. Leavitt-Imbloom’s work is pretty much the poster child for the modern needle-painted cross stitch style.  Note the fluid forms, the subtle shadings that mimic painting, the half and quarter stitches and sparing (though dramatic) use of double running stitch outlines.

By contrast, here is one of the Oxburgh Hanging panels dated circa 1570, stitched by Mary, Queen of Scots (and/or Elizabeth Talbot, one of her ladies) during captivity.  The first photo is shamelessly borrowed from the artifact’s Victoria and Albert page (Museum accession #T.33JJ-1955).  The detail shots below it were taken by Elder Daughter on our visit there.  If you click on the details, you’ll be taken to larger versions for closer inspection (patience please on the download, some are huge). 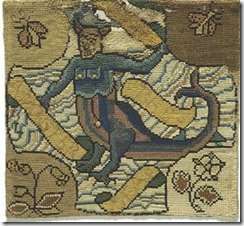 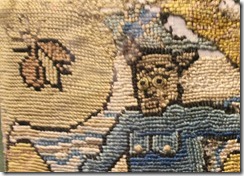 Now, the official descriptions cite “tent stitch” for all of the Oxburgh hangings.  But if you look closely at the insect being inspected by the sea monster, it’s pretty clear that cross stitch was employed on this particular slip.  Also note that the different parts of the insect were stitched with no regard for maintaining “the same leg on top”.  Although some unworked bits just north of the Monster’s  head can be seen and counted, we can’t rely on that because the bright white cloth peeking through the stitching is conservator’s ground, onto which the fragile stitching has been affixed.  Fortunately, there is a small damaged area just north of the insect where we can see the original fabric:

On style – yes there are shadings, produced by marling a small number of colors of fine floss-fiber together to make threads of intermediate hues, rather than selecting pre-dyed solid threads of graduated color.  But the shadings are far les subtle than the modern work.  There are strong outlines also worked in cross stitch, probably related to the drafting methods of the time, in which the design was drawn directly on the linen prior to stitching.  It is possible that black outlines were worked in part to cover those inked or otherwise drawn lines.  I also think the outlines were worked first, based on the way that other stitches encroach upon them, with the colors added later – first to the foreground items, and finally to the background areas. Note that the lines do break in a couple of places, but I can’t say whether that is due to differential thread wear or they were truly omitted.

Now these all-over figural embroideries like the Oxburgh slips are not the only form of historical cross stitch.  In fact, pictures like these are among the minority of surviving examples. Far more represented in artifact collections today are borders and strips in long-armed cross stitch or its variants.  They’re not common, but cross stitched pictures did exist in the world of of the 1570s.  And they looked rather different from contemporary figural cross stitched pieces.