I have no idea if this design has ever been given an official name, but it shows up with regularity in museum collections.  It’s part of a larger design cluster that includes several other patterns, but more on that another day.  Today is the Flower’s day.  Now.  Is this a 17th century design?  Or  is it later…

I call it “Spider Flower” because it’s characterized by a center bloom that has rather arachnid looking petals, often spiky.  It can also be recognized by a simple diagonal meander (with up/down symmetry), and some sort of knot or “wing-nut” swelling ornamenting the simple meander.  It’s usually accompanied by a smaller secondary border, but there is little consistency among samples on the secondary border.  However, the secondary borders can help in assigning Spider Flower to the cluster I mentioned.

In addition to the general voided layout, there is often complex hatching or other ornamentation on the foreground bits.  The background varies too, although it’s usually a solid color treatment – either long-armed cross stitch, or the tightly pulled mesh stitch common to strip pieces produced in Italy.

This sample is a photo from the Boston Museum of Fine Arts, Accession 16.300.  The museum calls the ground “tent stitch” but it looks more like a four-sided Italian cross stitch pulled moderately tight (the mesh effect is not very pronounced, but the coverage is there).  It’s part of the MFA’s Denman Waldo Ross Collection, which means it was collected some time prior to his death in 1935.  The MFA does not date this piece, and attributes it to North Africa or Spain.

Apparently, Mr. Ross liked this design.  He found several examples of it.  Here’s another, also from the MFA, Accession 98.204.  The museum calls it out as “Spanish or Eastern,” but tags it as being Italian embroidery.  Again, it’s called tent stitch, but zooming in shows that the ground is the same four-sided boxed cross stitch, pulled tight.

Nope, it’s not part of the same piece, although the similarities are clear.  Not only are the secondary border and internal fills different, but the details of the voided area’s shapes are a bit different, too.  Yet for all that, it’s clearly recognizable as another Spider Flower.

Mr. Ross’ third sample in the MFA’s collection.  This one is Accession 93.208.  Same working method, and again – the museum’s own photo.  No date on this one either, although it is also called “Spanish or Eastern,” and tagged as Italian embroidery.

This one has a different and more elaborate secondary border.  Also the border is asymmetrical north/south.  Possibly it came from the end of a towel or cloth.

But not all of the Spider Flowers I have seen have come from the MFA.  Here’s one in the holdings of the Yale University Art Gallery, accession 1939.498 – a gift of Mrs. F.M. Whitehouse in 1939.  The museum dates it as being 19th century, originating in Morocco, but put a disclaimer on the page saying that the on-line documentation does not necessarily reflect their most current knowledge about the piece. 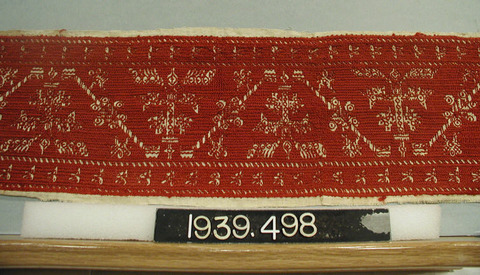 The picture is rather dark and compressed, and the work itself is heavier and less delicate than the above samples, but it’s clear that we have our Flower, along with its companion border.  There are some similarities – the layout, the center flower and meander, the ornamentation inside the voided spaces; and some differences, the largest of which is the truncation of that wing-nut decorated lozenge on the meander’s center.  It has lost its center barrel.  As far as technique goes, I can’t say anything for certain, although given the density of the ground and its alternating left-right directionality, it might be long-armed cross stitch.

The Metropolitan Museum of Art (MET) in New York also has its own Spider Flower sample.  Accession number 09.50.1375 seen below in the museum’s photo, was purchased for the museum through the Rogers Fund in 1909.  This artifact is dated 16th century, and is sourced to Italy or Greece: 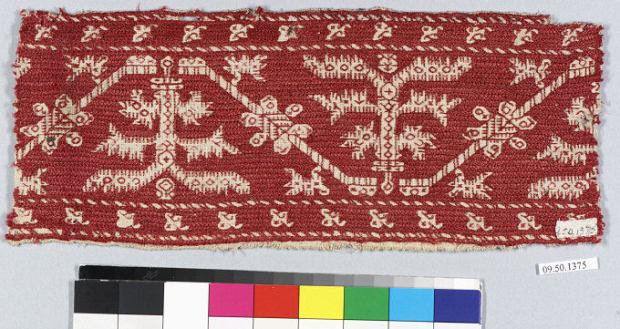 Companion border?  Check – and again a totally different one accompanying the main design.  Intensely decorated voided spaces?  Check.  Spindly flower, meander, and barrel/wing-nut lozenge?  Yup.  This one to me reads as a likely long-armed cross stitch ground, with the plaited row appearance of that stitch.

And lest you think these things were only done in red – here’s in indigo example.

I have quoted this image from the page of Mr. R. John Howe, private collector and dealer in textiles (it’s about half-way down the very long listing), in his report on an 2010 address given by Mae Festa, a noted textile collector, at the Textile Museum in Washington, DC.  Ms. Festa attributes the piece to 17th century Italy.  She calls it out ias being done in cross stitches and double running stitch.  I think the ground is long-armed cross stitch.

So.  What can we say about the group as a whole?

Mostly that it is of an undetermined and broad Mediterranean origin, with museums placing the pattern anywhere from Spain to North Africa, to Greece – with a time stamp ranging from the 1600s to the 1800s.  That’s a lot of wiggle room.

Why are the dates and places so imprecise?  That “Indiana Jones” era of private collecting, for one.  The identification on these bits often depended on the claims of the dealers who sold them to the original art patrons on tour.  Very few of these household linen fragments have been revisited in detail since museum acquisitions, and those happened between the 1880s and the 1930s.

With no detailed analysis, I can’t second guess the experts, but comparing these to other Moroccan pieces, and to others in the design cluster, then factoring in the conservative nature of traditional stitching, I’d say that it’s not impossible that such an easy to stitch design persisted for a very long time.  1800s – possibly, but I think these are sufficiently different from clearly dated ethnographically-collected Moroccan pieces of the 1800s to warrant speculation that they were done before that (or possibly elsewhere).  Early 1600s might be an optimistic stretch, though.

Why do I think this design is easy to work?  You’ll see…