Thanks to Elaine, whose comment on the Spider Flower post sent me off on a new research quest, a group that had long intrigued me has now been solidly planted.

I had seen many examples of what appeared to be a related set of stitched fragments, from many museums, collected over many decades – mostly by amateurs in the late 1800s/early 1900s.  These were identifiable as being a group because of shared motifs, designs, treatments, materials and overall look.  But the museum IDs and book citations were all over the place, citing individual examples as being from anywhere from the Greek Islands, to Sicily, Northern Africa (unspecified), Spain, and the Italian mainland.  For example, all of the patterns on this page can be found in Lipperheide’s Muster altitalienischer Leinenstickrei, Volume 1, published in 1881, credited as Italian works.  Dates also ranged widely with some examples being attributed as early as the 1500s, and others tagged as late 1800s to early 1900s.  I do note however that comparing current tags to my old notes, over the last few years several museums have updated their provenance notations to locate this group in Azemmour, Morocco.

We’ve already seen the Spider Flower, this example from the Boston Museum of Fine Arts,  Accession 93.208. Again, their sample is undated, and is tagged as Spanish or North African, with a note that it is “Italian embroidery.”

Here are some others of the same group.  This one I tag as the Pomegranate Meander, because the ornament on the diagonals has swollen into an enormous fruit, and the center flower has shrunk down to a skeletal remainder.  This sample is quoted from the Cleveland Museum of Art’s photo, and is tagged in their collection as being from Azemmur (an alternate spelling), 19th century, Accession 1929.843. 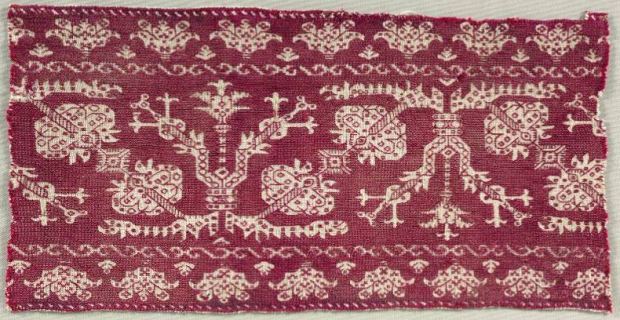 Mr. Ross has provided us with a Pomegranate sample, too. This one is also at the MFA, Accession 11.2880, called out as Spanish or Eastern, with no date.

Here’s a different member of this group. In my notes I tag it as Wide Snake Meander.  This one is from the musée du quai Branly, in Paris, Accession M61.2.16, and is attributed to 17th-18th century, from Azemmour.

This design crops up not infrequently.  Here’s a sample from the MFA, Accession 93.1495, no date, with Spain as provenance.  Another piece collected my Mr. Ross – this is the MFA’s photo.

And another, from TextilesAsArt.com, entry 2227, they call it out as being Moroccan from Azemmour, and date it to 1650.

Here’s a sample of Wide Snakes that has a different border.  This photo is quoted from the dealer RugRabbit’s website.  They ID it as 17th century, Moroccan.

From the Metropolitan Museum of Art, Accession 09.50.1291, now tagged as Moroccan from Azemmour, from the 18th century.

Azemmour has a second style in addition to these pieces.  Birds.  Paired birds with and without vases or urns, or trees in between them are extremely well represented in museum and private collections.  Although paired birds are common in early modelbooks and in stitching examples throughout Europe, the Azemmour birds have a particular look, often done in two colors, with outlines in black and the voided ground in red.

Here is a particularly choice example from the Textile Museum of Canada, Accession T85.0301, dated to the 18th century (image quoted from their photo). 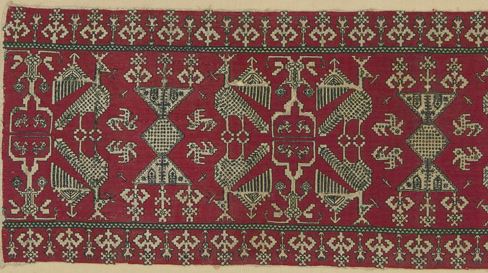 And these same birds make appearances on darned net, this image is from a Gros & Delettrez, a dealer in antiquities, who call it out as being from Azemmour, made in the 1800s. 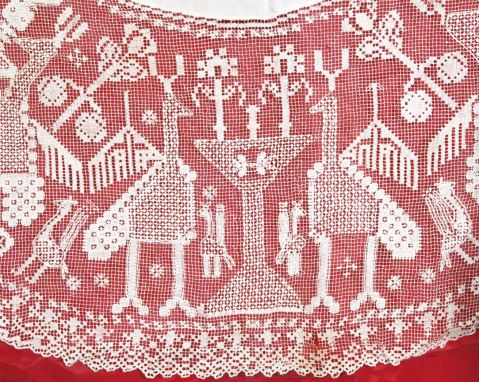 Now.  Where did all of these come from?

I’ve read a few accounts that claim Jewish refugees fleeing the Reconquista and Inquisition in Spain settled in and around Azemmour.  It is speculated that their influence blended with the local Islamic stitching heritage, to create this local style family; one that is distinct from other Moroccan stitching styles.  The Jewish link is cited by The Textile Museum of Canada. The Jewish Virtual Library notes the migration and community.  The Jewish link is also mentioned here. The Textile Research Centre writes that production of Azemmour pieces died out in the mid 1900s, although recent revivals have been undertaken.

Finally, to muddy the waters further, here is an artifact that might be seen as a bridge between European/Italian voided work, and the voided work done in Azemmour.  This is a strip in the collection of the Cooper-Hewitt Museum Accession 1962-58-17, attributed to 16th century Italy, and the image below is quoted from their photo.  Yes, the foreground of the motifs are left quite bare compared to the ornamented Moroccan samples.  But look at that design.  Does it remind you of both Spider Flower and Pomegranate Meander?   It should…