Within a general miasma of the-project-is-over-what’s-next blues I present the tablecloth and napkins set: 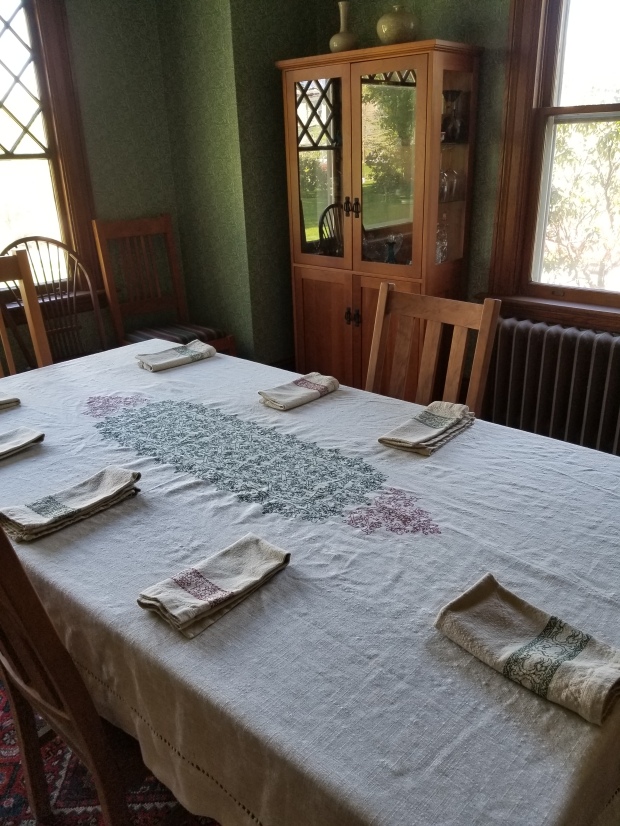 Yes, I will iron the thing before I set a formal table with it, but there’s no point in doing it right now. 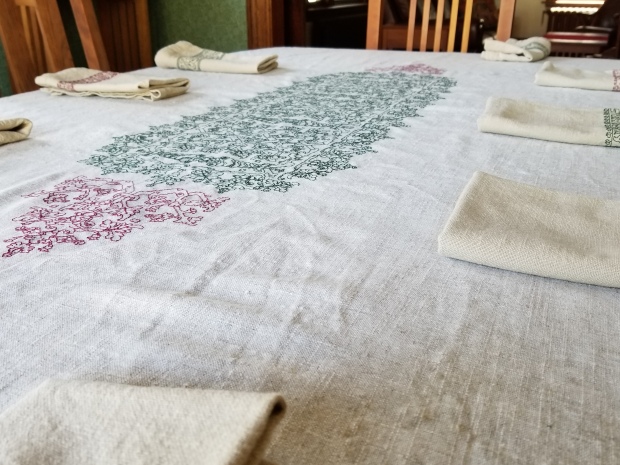 I left the areas close to the place settings bare so that in the absolute eventual occurrence of gravy spills, it will be easier to treat the stains. 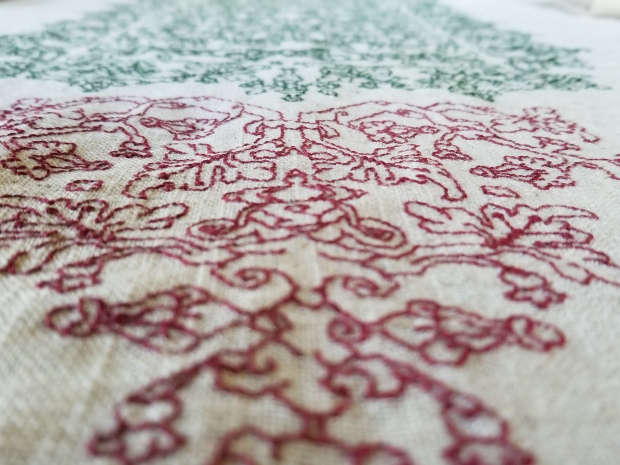 Special thanks to Elder Daughter for these shots.  She’s much better at general camera, even cellphone camera than I am.

I feel the need to keep stitching.  If I can find my stash of green silk I may go back to my Long Green Sampler.  But I put it away in a Safe Place; that classic Safe Place that is now out of memory.   While I keep hunting for it I might do a quickie, improvised project, then turn it into something useful, like a carry bag or zippered pouches.  So many patterns to try out, and so little wall space at this point.

Now in summary and project post-mortem.

I started by buying a plain pre-finished cloth and separate set of napkins from Wayfair.com.  I wanted a “rustic linen look” and intended to use them as-is.  But when they arrived I noted that the thread counts on both were close enough to even weave to be usefully stitched, slubs and all.  I used a mix of threads – a red Sajou embroidery floss #2409, and DMC 890 green floss for the napkins; and (having run out of my souvenir Sajou) DMC 815 on the tablecloth.  For the various flosses, I used three plies of both kinds, even though the Sajou was marginally thinner than the DMC.

I started with the napkins, doing one at a time, half red and half green, for no other reason than I thought it would be fun: 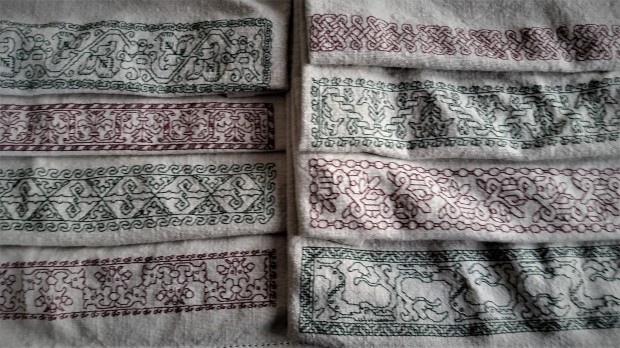 The designs are primarily from my ever-forthcoming Second Carolingian Modelbook.  After the napkins were done, I wanted to make a coordinating cloth, similarly mismatched in the same two colors.

I started with the center panel design which I graphed up, also for T2CM, from an artifact in the collection of the University of Rhode Island. While it is voided here in the photo provided to me by Christine Lee Callaghan (SCA – Lady Cristina Volpina), I chose to work it outline-only for this piece.

Riffing on the motifs in the historical artifact, I designed a companion edging and end-triangles to complement. Those designs aren’t in T2CM, but as soon as it is released, I will post them here.

All in all, I am quite pleased with the result.  Now to figure out what to stitch next, because I find stitching more relaxing than knitting, and the need to stitch is still upon me.