My holiday knitting. I’m pleased to say the Hannukah socks were graciously received by someone who both knows and appreciates hand knitting.

The scarves aren’t scheduled for distribution until later this month, but as all are to be mailed, should be boxed up as soon as possible. Here they are:

First, the blue one for which I offered up the texture pattern earlier in the week. 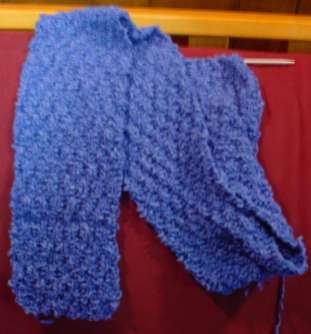 Not terribly exciting, but soft and warm. And blue. I’m debating whether or not to fringe this one. Fringes aren’t my favorite edge treatment as they often look ratty too quickly, but I have a feeling that this recipient would like them.

Second, the gray alpaca Kombu scarf is finished. Here’s another blurry photo to prove it:

And finally, after sitting completed (but never used) since earlier this summer, the Spring Lightning scarf joins its siblings in this year’s gift parade:

I love it, but I think the intended target will love it more. Plus, I can always make another. I did however want to take a final good picture of it for use in the pattern I plan on posting on wiseNeedle (which I’m still writing).

Two more hats and two more pairs of socks and I can return to my regularly scheduled knitting.

Posted in: Lacy Scarf, Other