I admit it. I’m wrong. Not that it happens all that infrequently. Yesterday I answered a question on the KnitList about the central double increase used in the side panel cables of Rogue. I didn’t have my knitting with me, nor was I at my base station, surrounded by my reference library. So of course, I messed up.

Because confusion persists, and I still think there might be a typo in the directions for this stitch as written, I present a walk-through.

The bottoms of the closed loops in the side panel cables are formed by central double increases. The Rogue pattern directions say:

"on RS, knit into the front and back of st, pick up the vertical strand running downwards between these to st just made, twist and knit into this picked-up strand: 3 knit sts made from one st"

I think the "knit into front and back" should be reversed. The all-knowing Barbara Walker in both her Charted Knitting Designs (aka Walker III) and Fourth Treasury of Knitting Stitches (aka Walker IV), says this (paraphrased from page xxiv of Walker III):

Knit one b, knit one in one stitch, then insert left hand needle point behind the vertical strand that runs downward from between the two stitches just made and k1b into this strand.

Like a dingbat I also reversed the front/back first step. Here’s how it should go:

First, knit into the back of the stitch (needle shown inserted into back of next stitch, ready to knit):

Then knit into the front of THE SAME stitch (needle shown inserted in the right place, ready to knit):

Here’s the result after doing the two knits described above: 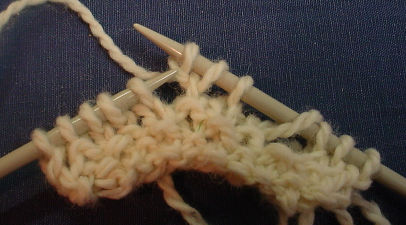 If you look carefully, you can see the vertical bar both sets of directions describe. I’ve called it out with an arrow:

The end result: three stitches where there was one before: 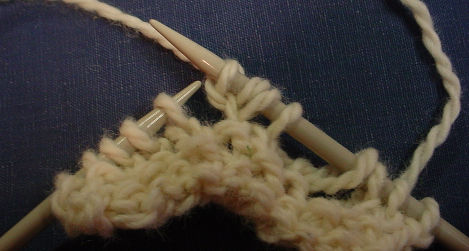 The beatings may commence at sundown. Thanks to Rosemary who took me to task on this one.

I also received an interesting observation from Melanie, who said she’d tinkered with Dragon Skin and noticed that it made a very pronounced scalloped edge. She wants to know if Little Dragon Skin does this too, and whether or not it will be a problem.

Little Dragon Skin also scallops. (It would make a very nice scarf stitch for this reason). I am hoping that the two-inch hem facing, knit on smaller needles will help tame the scallops. I can’t say for sure that it will. This may end up being one of those bugs that lives on as a design feature.

I’m almost up to the point where I will be unzipping the provisional cast on, putting those stitches on another needle and working them along with my main body stitches. In effect I’ll be fusing my hem facing to eliminate the need for sewing it down later. I should be able to tell at that point if I like the effect.

Should I have taken the time to work all this out in the swatch before casting on for the main piece? Sure. Absolutely. Most sane people would have thought to do so. But I find knitting to be more exciting when you live dangerously, and I don’t mind ripping back.