Still humming along on Alcazar. I’m almost through Chart #2, the fountain section. Again, one very minor (and absolutely obvious) glitch on the half chart. In row 21 there’s a blank box. That should be read as a knit stitch. The problem looks like it was caught and fixed by hand on the full-chart version. 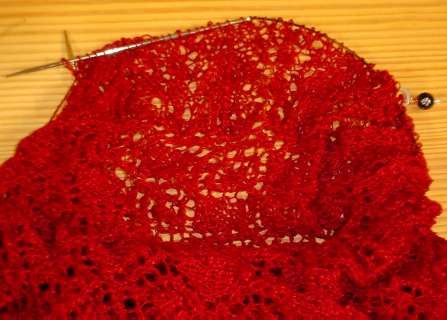 I’m enjoying this one. It’s going much faster than I expected. One thing that makes the Carter patterns fun is the patter that accompanies them. Yes, some people just want the pattern. I happen to enjoy the way she fills out her instructions with an accompanying folk tale, or takes valuable space to explain the symbolism of or thought process behind cher design element choices. For example, this pattern is inspired by the buildings and gardens of the Alcazar, a palace in Seville, Spain. Parts of the palace are Moorish in origin, parts were added by various later rulers, including Pedro the Cruel and most recently – Franco.

If you look at Carter’s design and then at the palace pix above, you can see the tiled mosaic floors, fountains, cobblestone paths, and arched doors and pierced screens that inspired her. Very nifty.