This weekend past we went to a local SCA event. We’re not very active
in the organization any more, but every now and again it’s fun to show
up and partake of the day. This particular day was quite warm, and we
arrived late – missing the most strenuous part of the planned
activities. We mostly sat in the shade and enjoyed various song and
story performances. In the evening a very ambitious dinner was served,
consisting of dozens of dishes from a recently translated 16th century
Italian cookbook.

I
keep a small sampler I work on when I go to events like this. Now that
I’m up to the easily replicated borders, I rarely stitch on it in
between events.

My doodle is worked on even weave unbleached linen, using DMC’s Danish Flower Thread. The
Flower Thread is a matte finish cotton. In construction this thread is a single
strand, as opposed to the more commonly seen multstrand
embroidery floss. Having used both, I find that for small pieces, this
thread mimics the look (but not the stiffness) of linen thread. I’m
working at at the extremely coarse gauge of 11 stitches per inch, on 22
thread count ground. It’s quick and easy to see. 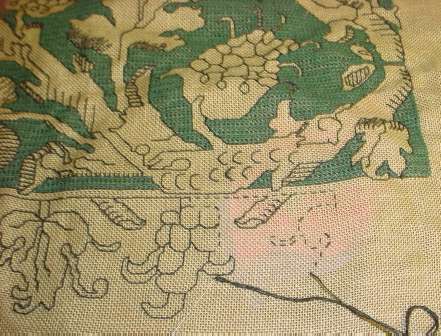 All
of the black lines in the piece are done in double running stitch (aka
Holbein Stitch, Spanish Stitch). You can see the bit in process, where
I’ve established a baseline. All of the "growths" from that baseline
are traced out and filled in again as I go along. The background is
done in long-armed cross stitch, worked back and forth across the piece
to heighten the illusion of a plaited ground. Since I’ve already done a
full repeat of the border, I no longer need to refer to my original
printed pattern. Also, because the whole goal of this piece is "quick
and portable," I’m not working it in a large rectangular frame. Instead
I’m using a plain old 7-inch diameter round tambour-style embroidery
frame. My matte finish single construction thread stands up to the
hoop’s abuse much better than does silk or even cotton floss.

The design is another one from my New Carolingian Modelbook. It’s on Plate 74:1. I graphed it from a photo of a late 16th or early 17th century artifact, appearing in Adolph Cavallo’s Needlework.
(New York: Cooper Hewitt Museum, 1974). What I like about this design
in particular is the way the edges of the work pop past the internal
border. The meaty branches have an almost palpable vitality, as if they
can’t be contained by the formal constraints of the stitching. Working
a solid background (as was done in the original) heightens the effect.

I’ve
only tried out one repeat of the central design. The historical piece
repeated the S-shaped flourish, mirroring it at either end. Since this
is a self-contained unit, it can be either mirrored or it can be
repeated in the same orientation to make a longer length of patterning.
Period embroiders used both methods of composition to construct longer
decorative bands.