Today I document a Good Deed.

A co-worker, all puppy eyes and pleading, brought his favorite sweater to me yesterday. He bought it in Ireland, and practically lives in it all winter. He’d caught the elbow on something sharp, and cut a strand. And then the snag started to run. He asked me if I could fix it.

The sweater is of good quality, rustic finish wool. It looks like it was knit from two strands of sport or guernsey weight. The seams are machine-sewn, and there’s a nice “commando collar” – double thick ribbing, inset in a V, with a low turtleneck finish and center zipper. I’m not a machine knitter, so I’m not really up on what can and cannot be done using one, but the cables are not deeply embossed. They’re all formed by traveling stitches rather than multiple-stitch cable crossings.

Still, it’s a particularly nice and obviously beloved item. So I brought it home to fix.

Fixing hand knits with runs in them should be second nature to most knitters. First, you want to identify the break. Then if a run or ladder has developed, you want to spot the bottom-most good stitch that sits below the run. That’s the one that needs to be secured, and the one that you’ll use later in the repair. In this case, I secured it temporarily with a safety pin so it wouldn’t ladder down any farther.

If the yarn has broken, the ends need to be secured. Since this is a nice, sticky, traditional finish wool, the stitches left and right of the broken one hadn’t raveled side to side. (A plus for working with real wool). I reinforced them gently on the wrong side with some darning yarn of the same color, taking care not to let my repair show through to the front. Then I smoothed out the lumpy ladder, separating the rungs. Obviously there was one rung missing – the one that would have been formed by the broken strand. I laid some long stitches across that spot with my matching darning yarn until I had approximately the thickness of the original yarn built up.

Then I took a crochet hook and starting with that stitch at the base of the run, I re-formed the knitting stitches. I did this by pulling each rung through the stitch below it. Luckily this particular repair occurred in a plain stockinette area. I didn’t have to deal with crossed stitches or purls.

Once I had re-built all of the stitches, I had one top stitch that needed to be secured. Again I was lucky. This particular column of stitches “dead ended” at a traveling stitch cable. I used my darning yarn to take a tiny stitch, securing the loose loop to the side of the cable at the point where it would have been eaten by the decrease that formed the cable’s movement.

Here’s the result (not that my lousy photography skills and a charcoal gray subject make it any easier to see): 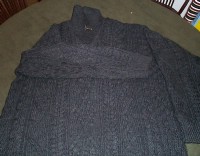 The formerly broken bit is in the top center of the sleeve that lies across the body, roughly below the zipper slider. You can’t see it, but take my word for it – the repair is totally invisible.

So, today’s morals are:

Posted in: Blather, Other