A FAMOUS PATTERN TURNS UP ON DO-RIGHT

The latest addition to the Do Right sampler is this strip, which will run across the bottom of the piece.

The few who might be familiar with this type of work will spot it right away as being a Famous Design. The original is in the Victoria and Albert Museum – it’s a handkerchief, dated to between 1580-1600. Among embroiderers it’s a near iconic artifact, and has been pictured in many books including Digby’s Elizabethan Embroidery, and King and Levy’s The Victoria and Albert Museum’s Textile Collection: Embroidery in Britain from 1200 to 1750. I’ve got a graph of the design noodled out from artifact photos in TNCM (Plate 64:1), and there’s a simplified version of a very similar pattern in Pesel’s Historical Designs for Embroidery, Linen and Cross Stitch, although Pesel cites her source as a sampler dated 1658. (Perhaps there’s a point of origin for this design in a now lost pattern book or broadside that both historical stitchers used).

In any case, you can see one whole repeat here, and I’ve started on the second. In complex double running stitch designs of this type I proceed in one of two ways, both of which can be seen on this piece. The first is the baseline method. I identify a baseline, then if I encounter a branch or digression along that baseline I follow it to completion. If you look at the narrow strip acorn and leaf border at the top of this segment along the left hand side you’ll see that I’ve been working in that manner. The baseline here is very easy to see – it’s the single solid line at the base of the acorn/leaf units. I’ve traveled along it, then up into each sprig as I encountered it, completing the sprig and returning to the baseline. When I work on that strip again I’ll start on the baseline and fill in the remaining few double running stitches before continuing on to work more sprigs.

The second method works better on more complex designs. While I could establish a baseline and then fill in every deviation from it on the honeysuckle and vine center motif, if I were to do that and then discover that my stitching was out of alignment, there would be much swearing and stomping around, not to mention endless hours of meticulously picking out previously finished areas. So for these bits, I generally try to rough in major areas with a line of stitching that establishes their boundaries. Then I go back and fill in the detail. You can see this on the second flower. I’ve done a jog around the outside edge of the flower, confirming its position relative to previously stitched bits. Once I’m satisfied that there are no mistakes in the placement of the flower, I go back and do the more detailed infilling bits. Here’s another detail of the working method, from a piece previously featured here: 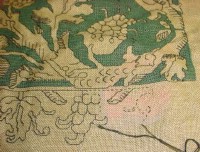 As I’ve said before, while I dearly enjoy knitting, it’s a vacation from my first love – embroidery.